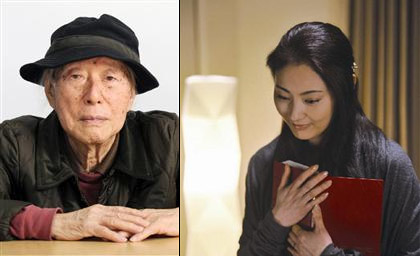 Acclaimed movie art director Kimura Takeo (photo left) died of interstitial pneumonia at a Tokyo hospital last weekend, it was revealed today. He was 91. Renowned as one of the finest art directors in the business, he worked on over 200 films, most notably with cult director stop-headaches-now.com. Suzuki said of his collaborator, “Kimura makes every movie as if it were his last. And he would think ‘if this is my last, then I can do anything I want.’ That’s why I love working with Kimura as an art director.”

Kimura joined the scenography department at the Nikkatsu studio in 1941 and made his debut on the film “Umi no Yobu Koe” in 1945. Among his best known films are “Zigoineruwaizen” (1980, dir. Suzuki), “Umi to Dokuyaku” (The Sea and Poison, 1986, dir. Kumai Kei), “Yumemiru yoni Nemuritai” (To Sleep so as to Dream, 1986, dir. Hayashi Kaizo). He made his feature length directorial debut in 2008 at the age of 90, with “Yumeno Manimani.”
Related article:
Suzuki Seijun â Legendary Movie Maverick

Actress Tokiwa Takako (37, photo right) has landed her first leading role in a TV drama since she got married last year. She will team up with writer Kitagawa Eriko (48) on the TV Asahi special drama “Okaasan no Saigono Ichinichi.” The two have collaborated on several popular romantic dramas, but the most recent was the massive 2000 hit “Beautiful Life,” in which Tokiwa fell for Kimura Takuya (37). But as she says herself, “I’m at an age where love stories are tough.” The subject matter of “Okaasan…” is quite different – a mother’s final day with her family before she dies. But she pointed out, “It’s not just a sad story. It also conveys the warmth of family bonds.” Tokiwa married playwright-actor Nagatsuka Keishi (34) last October.