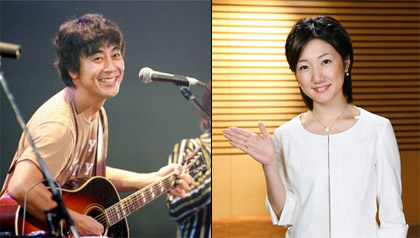 Popular singer-songwriter Yamazaki Masayoshi (38, photo left) recently got married, it was revealed earlier this month. He is known for keeping his personal life private, and no details are known about his new bride other than she is not in show business. Currently celebrating the 15th anniversary of his debut, Yamazaki has not been the subject a single romantic rumor until now. Among his many hits are “One More Time, One More Chance” and “Serori,” which he wrote for super idol group SMAP. He has also appeared in several movies and TV dramas, and earlier this year co-starred in “Bungo – Nihon Bungaku Drama” on TBS.

TV Asahi announcer Uemiya Nanako (28, photo right) said this morning that she is engaged to a Tokyo-based company employee (30). She made the announcement during a regular appearance on the “Super Morning” show. The couple, who have been dating for about six years, plan to hold a wedding ceremony and reception on April 24. As seems to be the norm, Uemiya made a point of saying she isn’t pregnant and plans to continue her TV career.