As was the stage tradition in Elizabethan England, kabuki is performed entirely by men. Strangely enough however, this art form was created by Okuni, a female shrine attendant, in the 17th century. Although greatly influenced by the aristocratic noh, kabuki was largely popular entertainment for the masses. A large part of the popularity of the early, all-female performances was due to their sensual nature. The performers were also prostitutes and male audiences often got out of control. As a result, women were banned from performing by the Tokugawa Shogunate. Ironically, the young male actors who took over kabuki also engaged in prostitution and audience disturbances continued to break out. Again, the Shogunate clamped down and troupes composed of older actors were required to perform more formalized and strictly theatrical dramas, based on kyogen. Changes were made to the traditional noh stage, such as adding a draw curtain and a hanamichi (catwalk) through the audience to allow dramatic entrances and exits. 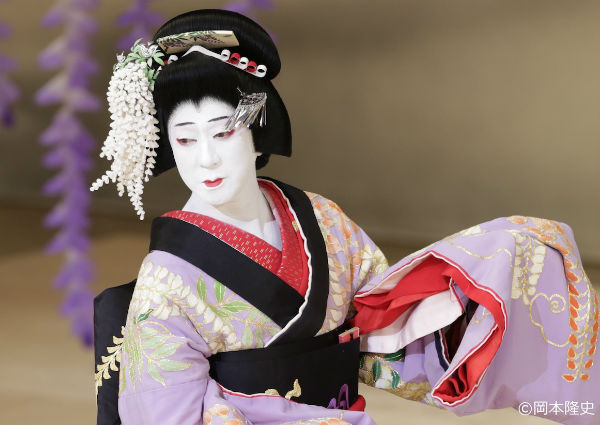 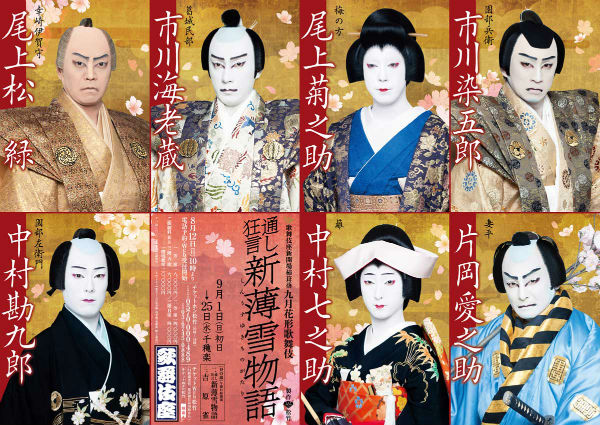 Widely considered as Japan's greatest dramatist, Chikamatsu Monzaemon (1653-1724) spent the mid-part of his career writing kabuki dramas, although his greatest works were bunraku puppet plays. When he returned to bunraku, many fans went with him and kabuki actors began to incorporate elements of bunraku in an attempt to woo them back. Among the great kabuki dynasties, the Ichikawa Danjuro line is perhaps the best known and continues to this day. Ichikawa Danjuro II (1688-1758) premiered many great works and adapted puppet plays for the kabuki stage. Successors played a huge part in raising the status of kabuki in society. Other great acting dynasties include Onoe Kikugoro and Bando Tamasaburo.

The actors who play female roles are known as onnagata or oyama, such as Bando Tamasaburo (above). As kabuki gained a level of respectability, the importance of these roles increased. The first great onnagata was Yoshizawa Ayame I (1673-1729). Many of the great kabuki actors have built their reputations solely on these roles. The performances are not so much 'acting' in the Western sense as stylized representations of female beauty or virtue. While early onnagata were required to maintain their feminine persona and dress even in their private lives, this practice was abolished in the Meiji Restoration of 1868.

Kabuki is performed on a large, revolving stage and has such familiar stage devices as scenic backdrops and trapdoors for surprise entrances. Kamite (stage left) is often where you will see the important or high-ranking characters, while shimote (stage right) is occupied by lower-ranking characters. Actors perform kata (forms) as they have been performed throughout the generations. An example is mie or striking an attitude, often with one's eyes crossed and an exaggerated expression for dramatic effect. 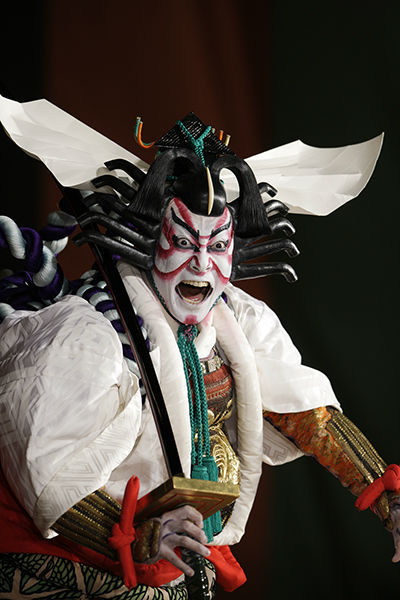 The aragoto or 'rough style' of acting is exemplified by such exaggeration and dramatic make-up and costume. It is associated with the Ichikawa Danjuro line, of which the young prince now is Ichikawa Ebizo (left). Die-hards in the audience join in the action, calling out the yago (house or family name) of the actors at prescribed moments in the performance. Standard male kabuki roles include the handsome lover, the virtuous hero or the evil samurai; for an onnagata, roles include the high-ranking samurai lady, the young maiden or the wicked woman.

Traditional kabuki is highly melodramatic but strictly historical. Like the work of Shakespeare, the old stories and characters in the plays are all familiar to those in the know even though the language itself is often antiquated and hard to follow. But while the Bard's masterpieces are still widely popular among all ages, kabuki is no longer of much interest to younger Japanese people. Audiences tend to be made up of older people and refined young ladies. One of the most famous stories, Chushingura - a tale of revenge and loyalty - owes most of its popularity today to its many movie adaptations. Various actors and troupes have worked to incorporate avant-garde elements into kabuki and have worked in other areas such as TV and film. The actors themselves seem to do alright, at least the ones from the famous kabuki dynasties. Their romantic escapades make tabloid headlines and they appear in the odd TV commercial so I suppose there's life in the old art form yet.

Kabuki is truly a theatrical spectacle, combining form, color and sound into one of the world's great theatrical traditions. But as far as dipping your toe into this particular cultural pond is concerned, a half hour spent at the Kabukiza theater in Tokyo, Shin-Kabukiza in Osaka or the Minamiza in Kyoto is probably all you'll need. At Kabukiza, for example, there is a separate box-office for seats on the 4th floor, where you can enjoy a single part of the program for as little as 500 yen. Seats for the full program range in price from 2,400 yen to 16,000 yen. An English "Earphone Guide" is available (except on the 4th floor) to give you the rundown on what's going on and also give you a bit of background. Feel free to get up and leave when you've had enough!

In November 2005, UNESCO announced its decision to designate kabuki as one of the Masterpieces of the Oral and Intangible Heritage of Humanity. It certainly didn't hurt its candidacy that the director-general of UNESCO at the time was Matsuura Koichiro, a Japanese. Kabuki joined Nohgaku Theater, similarly designated in 2001, and Ningyo Johruri Bunraku Puppet Theater, usually simply referred to as Bunraku, designated in 2003.