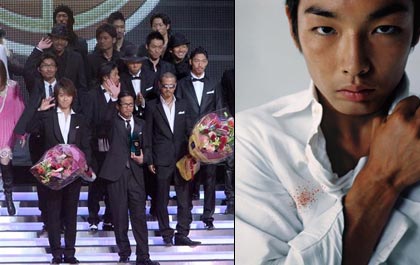 Catching up on a couple of stories from the past week…with record-breaking sales and a recent performance for the Emperor, the hugely popular dance/vocal group Exile (photo left) have had a pretty good few years and are rolling in the dough. But it seems even that might not have been enough. It was revealed this week that LDH, the management agency run by group leader Hiro (40), was nabbed by the Tokyo Regional Taxation Bureau for failing to report ¥300 million in revenue. The missing income – a fraction of the company’s annual earnings, ¥19 billion in 2008 – was from the two fiscal years up to March 2009. LDH said in a statement, “There was a difference of opinion, but we have already filed a revised tax return.” They refused to comment on the details, saying it related to their ongoing business dealings, but insisted that there had been no attempt to hide the revenue. The company represents a few dozen singers and models.

Moriyama Mirai Married, to be a Father
It was revealed on Thursday that acclaimed actor Moriyama Mirai (25, photo right) is not only married but also on his way to being a father. He and his wife, who sources describe only as not being in showbiz, started dating last fall, and got hitched early this year. The new Mrs. Moriyama is expecting to have a baby in October. Moriyama burst onto the movie scene in the 2004 tearjerker “Sekai no Chuushin de, Ai wo Sakebu,” (Crying Out Love, In the Center of the World) and won best supporting actor and best newcomer at the Japan Academy Awards. He has since had plenty of exposure in film and television roles, but has made time to work in a dozen theater productions. His latest stage role is in an adaptation of Franz Kafka’s classic novella “Metamorphosis.”