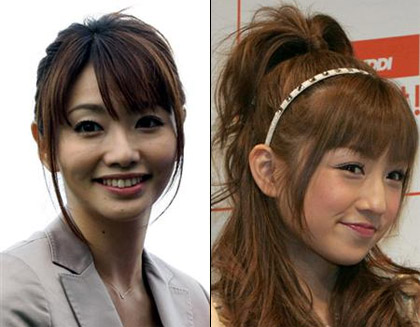 The president of the talent management agency that represented several popular female stars has been found guilty of tax evasion. At the Tokyo District Court yesterday, Makino Masaya (42), CEO of Ichi Estate Corporation (formerly Avant-Garde) was given a 2-and-a-half-year prison sentence, suspended for five years, and fined ¥85 million. He had been accused of evading taxes to the tune of ¥345 million on earnings of almost ¥1.2 billion over a period of three years up to the end of 2006.

Makino set up the company in 1989 and it became known as one of the largest stables of young, pretty, and largely disposable female talent. The dozens of girls and young women on its books would appear in magazines and manga, as pinup “idols,” race queens and a multitude of other decorative functions. In recent years the company represented such established celebrities as Manabe Kaori (28, photo left) and Ogura Yuko (25, photo right), and manipulating the increasing revenues generated from their growing popularity was done using an affiliation of paper companies. Over the last couple of years, the business underwent several changes of name in a game of cat and mouse with the tax authorities.

Megumi Hits Shibuya Pedestrian
Meanwhile, talento – and another former pinup girl – Megumi (28) was involved in a minor traffic accident, according to Tokyo police. She was driving in the Jingumae area of Shibuya Ward, Tokyo on Monday afternoon when she hit a female pedestrian in her 20s. The woman is said to have suffered minor leg injuries and police are currently looking into the matter.