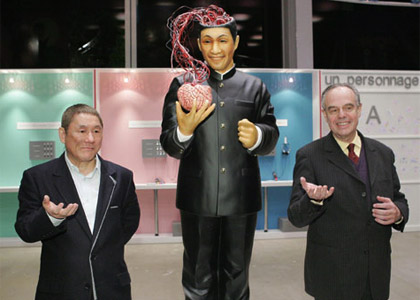 The multi-talented Kitano Takeshi (63, profile) was given the highest honor by the French government on Tuesday for his film and artistic works. French Culture Minister Frederic Mitterrand (photo right) presented the Commander of the Order of the Arts and Letters award at the Fondation Cartier museum in Paris, which is showing Kitano’s artworks to the public from Thursday through Sept. 12. His films will also be screened at the Centre Pompidou museum in Paris for the next three months. Mitterrand lauded the Japanese filmmaker’s extraordinary creativity and saying his work is full of spontaneity and teaches us about the multi-faceted nature of people.

“I have long had a fondness for Paris, which is at the heart of culture. This is like an illusion, a dream,” Kitano said. “I’m not so sure I deserve this honor, but I will do my best to be worthy of it.”

Kitano, still best known at home by his comedian stage name Beat Takeshi, made a dramatic entrance into the world of film directing in 1989 with “Violent Cop.” He went on to make a series of films in which explosive violence is balanced against human drama and artistic sensibilities, including 1997’s “Hana-bi,” which won the Golden Lion for best movie at the Venice Film Festival. His work has regularly been hailed in Europe, event the recent avant garde movies that left most Japanese audiences scratching their heads. 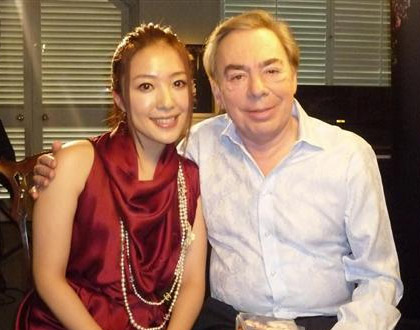 Already regarded as one of the most talented young vocalists in Japanese music, Hirahara Ayaka (25) has been given the nod by none other than Andrew Lloyd Webber (61) in what the local media is calling her “world debut.” The man behind such smash hits as “Cats” and “Evita” opened “Love Never Dies,” his sequel to “Phantom of the Opera,” on London’s West End this week. And it was revealed yesterday that he chose Hirahara to sing the title song on the musical’s album version. She recorded the song in a Tokyo studio in February and Webber was impressed enough to invite her to London for the premiere. “Love Never Dies” is due for release here on March 24.

A couple of numbers from the musical have been publicly performed and released in various forms over the last six months, and the title song has been recorded by Sierra Boggess, who is playing the heroine role of Christine DaaÃ©, and Katherine Jenkins. The Welsh singer was originally invited to provide the album version, but it was decided her mezzo-soprano vocal range didn’t quite fit the bill.

“Love Never Dies” is set 10 years after the original story. In his guise as an anonymous impresario, the Phantom invites Christine to perform at Phantasma, a new attraction in Coney Island. With her husband and son, she travels to Brooklyn…The musical has received mostly scathing reviews, from critics as well as fans of the original. 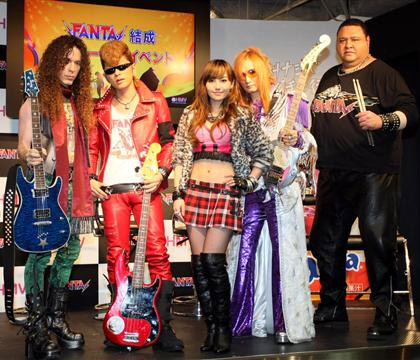 A couple of bizarre musical groups with a common connection are in the news today. FANTA is a rock quintet with a pretty unusual lineup: former sumo yokozuna (grand champion) Akebono Taro (40) is a Tower of Power on drums; former Megadeth guitarist Marty Friedman (47), who’s long since defected to the commercial dark side of J-pop; The Alfee guitarist Takamizawa Toshihiko (55), who leads the band and always looks like he’s stuck in the 1970s; J-pop singer Tanimura Nana (22) adds not just vocals but beauty and considerable cleavage; and on bass is Kishiden frontman Ayanokoji Sho (age unknown).

As the name suggests, the group was created first and foremost to promote a certain soft drink, though the TV commercials currently airing didn’t reveal the band members. Ayanokoji said he hopes the band do well enough that NHK let him back in the “Kohaku Uta Gassen” lineup on New Year’s Eve. A couple of years ago in his guise as DJ Ozma, he was banned from the public network after he and his dancers appeared in bodysuits that fooled TV audiences into thinking they were naked. 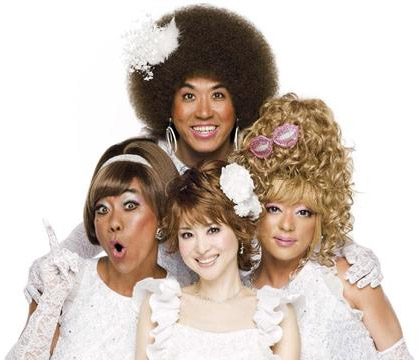 Ayanokoji also provides the common link with another outlandish group, Yajima Biyoshitsu (Yazima Beauty Salon). He and comedy duo Tunnels have enjoyed a string of hits since October 2008, performing as a trio of Vegas showgirls who happen to be a mother and her daughters with the names Margaret (Kinashi Noritake, 48), Strawberry (Ishibashi Takaaki, 48) and Naomi (Ayanokoji). They’ve earned enough commercial success that there is now an album out and a movie spinoff due for release April 29, with none other than Matsuda Seiko (48) singing the theme song. The song “Aidoru Mitaini Utawasete” (Let Me Sing Like an Idol), which harkens back to her heyday as Japan’s top idol singer in the 1980s, will be out as a single on April 21.