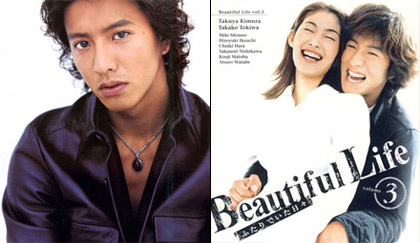 Fuji TV are putting actor and SMAP member Kimura Takuya back where his legions of female fans want him. He will star in a yet-to-be-named drama series in the network’s golden time slot, Monday 9pm, from April. Fuji haven’t revealed much about the show other than that the drama will be KimuTaku’s first full-on romance drama in 10 years, and that he will play a company president for the first time. No doubt Fuji will be hoping for the kind of huge success that rivals TBS enjoyed with the 2000 series “Beautiful Life.” That show, with KimuTaku’s hairstylist falling for Tokiwa Takako, as a wheelchair-bound librarian, had a massive audience rating of 41.3%.

Fuji last bet the bank on Kimura in their spring 2008 series “Change,” in which he played a schoolteacher who suddenly finds himself Prime Minister of Japan. But the show was only a modest success and lost out in the ratings to the popularity of actress Nakama Yukie in NTV’s “Gokusen.” The key to the new drama will be the actress chosen to play opposite Kimura.
Earlier stories:
An Unwelcome Change for Kimura Takuya (May 14, 2008)

Morimoto Leo Suffers Heart Attack
Actor Morimoto Leo (67) was recently rushed to a Tokyo hospital following a heart attack, it was revealed yesterday. The actor’s management agency said that he felt chest pains after getting up on the morning of February 27 and called for an ambulance. He is said to be recovering in hospital but has been forced to drop out of an upcoming drama. His other regular appearances, such as the Japan FM radio show “Mori no Sampomichi” and the TV Asahi drama “Salaryman Kintaro 2,” are subject to his ongoing recovery.

Morimoto is easily recognized by his sad expression and the doleful voice that, among other roles, provides the narration to the Japanese version of Thomas the Tank Engine.