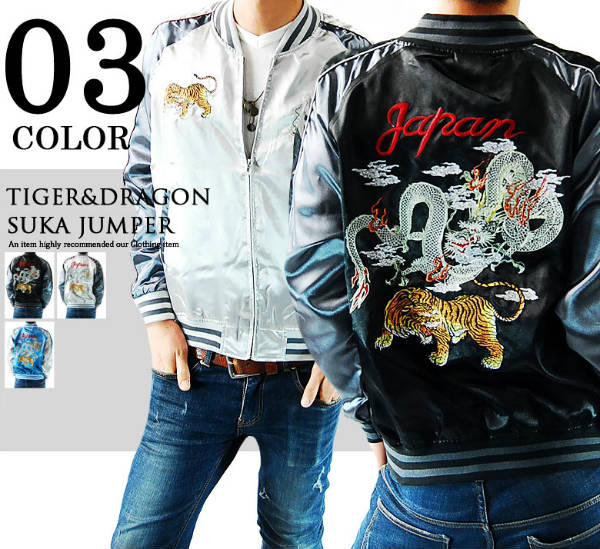 As you may know, the word “sukajan” is an abbreviation of Yokusuka Jumper, the name given to a style of satin jackets that became popular with GI’s in Japan after World War II. They’re also known as souvenir jackets. They come in a variety of colors and usually have elaborate embroidered designs on the front and back, with ribbed collars and cuffs. The most popular designs are traditional and iconic images such as dragons, tigers, carp, geishas and maps of Japan. Although they are a stylish addition to any wardrobe, for years they have tended to be associated with gangs and rebels in general.

We’ve sold sukajan for several years and they’ve always been a steady seller. But over the last year or so, reasonably priced sukajan jackets (as opposed to the really flashy ones that go for $300-$500 in Japan) have been increasingly hard to come by. Manufacturers tell us this is due to a big fall in demand for them in Japan, their main market. But this has come just as they are becoming more popular outside Japan and we were seeing more and more emails coming in from customers asking when more stock would be available.

Backed up by these indicators of overseas demand, we approached one major manufacturer and finally managed to get them to sell us a batch of about 300 jackets in a dozen or so different designs and a variety of colors. These are currently selling quickly on the store and the manufacturer is now ready to take us more seriously. We are in discussions with them about future orders and what new designs might be popular. They currently have about 30 different designs to choose from but want to focus on the designs that will be popular overseas.

We will soon be reaching out to our 10,000 newsletter subscribers to get an idea of which of these designs numbered 1-30 people would be most interested in wearing. Any given design will probably be made in three colors, usually black and two others from red, green, silver, grey and blue. Feel free to comment below – your feedback will be most helpful in figuring out which designs we will be selling in the near future.

A belated Happy New Year to all of our customers. 2013 was a good year for us and 2014, the Year of the Horse in the 12-year zodiac, is off to a galloping start. We’re seeing lots more orders than we did at this time last year, so that’s a good sign that things are starting to pick up in the global economy. And of course in our case the weakened Yen helps.

People here in Aichi prefecture have a reputation for liking things gaudy and expensive. So it was no surprise to see one jewelry store in Nagoya promoting its New Year sale with this ¥15 million ($150,000) full-size, gold-plated bronze horse. Although it’s modeled on an actual racehorse, that’s a lot to spend on a horse that’s not going to earn its keep by winning a steeplechase or two. If that’s too rich for your blood, Ginza Tanaka is also selling gold statuettes and oban (traditional oval coins) with a horse motif for a more moest ¥1.4-1.7 million ($14-17,000).

But don’t worry, you don’t have to spend a fortune to get your year off to a golden start. Our store lineup now includes a gorgeous little gold Maneki Neko, or lucky beckoning cat. These figures are traditional placed in the entranceway of a home or business, where they beckon to new customers, friends or even lovers! And the gold symbolizes the fortune that is headed your way. A bargain for just $25.95.