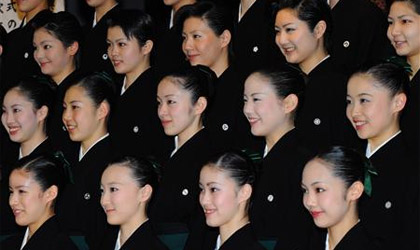 One of the annual rituals of Japanese show business took place this morning, as the latest batch of young women graduated from the Takarazuka Music School. From this afternoon the 38 members of the 96th graduating class will officially become members of the professional Takarazuka Theatrical Revue. As members of the Moon Troupe, they will take the stage for the first time from April 16 in a production of “The Scarlet Pimpernel.” Top graduate Norimatsu Ami, who will take the stage name of Yumeka Ami, addressed the ceremony, “Taking the things we learned at music school as nourishment for our hearts, we are leaving the nest to join the Takarazuka Theatrical Revue. The artistic road is long and steep, but we will carry on our quest with even greater devotion as maidens of the theater troupe.”

The school, based in the city of Takarazuka in Hyogo prefecture, is famously competitive with thousands of teenage girls applying for the 40-50 places each year. Those accepted face two years of strict discipline and rigorous training, and the ones left at the end join the professional ranks and perform at theaters across the country. 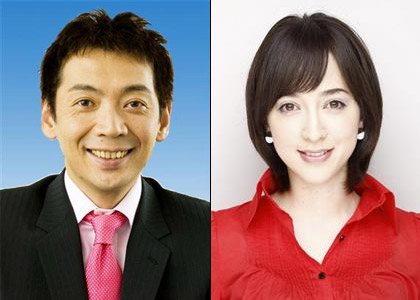 Japanese TV may have a new King of the Presenters. Just about anyone in the Kansai region of central Japan knows the name and face of TV presenter Miyane Seiji (46). His “Ohayao Asahi Desu” morning show (ABC TV in Kansai only) and “Miyaneya” afternoon show (NTV) are broadcast from Osaka every weekday. The ABC show is due to come to an end next month, and Fuji TV saw a chance to headhunt the rising star. From mid-April, he will be teaming up with former “News Japan” announcer Takigawa Christel (32) for a nationwide show broadcast on Sunday nights from Fuji’s studios in Tokyo. “Mr. Sunday” will air from 10pm from April 18, with the two popular freelancers at its core. Miyane will travel to Tokyo every weekend then rush back to Osaka for his ongoing NTV gig. His busy schedule will approach that of the master himself, Mino Monta (65, profile), who is recognized by Guinness World Records as the busiest man on TV.

Both Miyane and the half-French Takigawa have been maneuvering their careers steadily upwards and their pairing for the new show will be closely watched. Miyane has built a fan base with his typical Kansai frankness, his subtle way with words, and the wide range of topics he can cover. Takigawa, who graduated in French literature from Aoyama Gakuin University, failed to get into Fuji TV in 2000 and joined the subsidiary Kyodo TV. She was “outsourced” to a variety of minor posts on the Fuji network before landing the “News Japan” job in 2002. Since stepping down from that show in September of last year, she has appeared mainly in TV commercials for Toyota and cosmetics brand Shiseido.