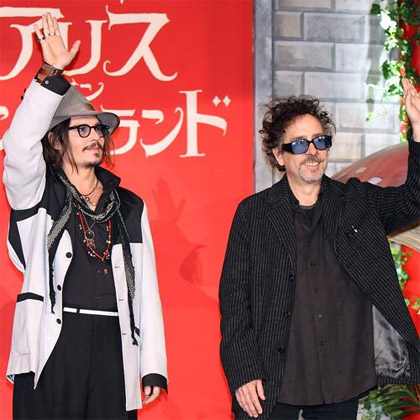 Hollywood heart-throb Johnny Depp was welcomed by a massive crowd as he arrived at Narita International Airport yesterday. He and director Tim Burton were in Tokyo for the Japanese premiere of “Alice in Wonderland” at the Ebisu Garden Place. It is the pair’s seventh collaboration, and Burton’s first excursion into 3D. Speaking at a press conference at the Park Hyatt Tokyo, he described it as “just a great tool, if you love movies. It’s a way to bring you into a movie in a way. Especially with Wonderland, which is such an off-kilter place, it becomes another character.”

He had no problem casting Depp as the zany Mad Hatter, a role the actor described as “not a great stretch by any means.” Asked whether Disney’s version of the classic children’s tale might be a little too scary for a young audience, Depp told reporters that his own kids are big fans of the movie. “My kids actually saw the film because I send them out there in the front lines,” he said. “They absolutely adored it. They loved every character. They weren’t freaked out by it whatsoever.” Japanese kids will have to wait almost a month to see it for themselves as it doesn’t open in theaters here until April 17.