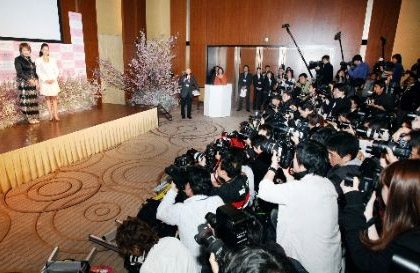 Actress Sawajiri Erika (23) made her much anticipated return to the public spotlight yesterday, but still on her terms. She appeared at a press conference for the beauty clinic chain Takano Yuri, for whom she will be pitching product. It’s been two and a half years since she last worked, after her refusal to play the public relations game changed her image from hugely promising actress to spoiled showbiz drama queen. And she was fired by Stardust Promotion last autumn, with the company saying only that she had been in serious breach of her contractual obligations. In between, she married a man twice her age and spent most of her time overseas. As Japan Zone reported, she has recently set up an office in Spain and acquired agents in various countries. So at yesterday’s event, reporters were more interested in her career direction than beauty products.

Asked if she would retract the recently announced legal requirement for media people to sign a six-point agreement before getting access to her press releases, Sawajiri said no. She said she has been surprised by the media backlash against her requiring that reporters respect her privacy and public image. But she was clearly also trying to get back on their good side, bowing and expressing her apology several times. She often choked up and took long pauses as she thanked those who have supported her.

Misaki to be a Mama
Management for Itoh Misaki (32) announced this week that the popular actress is pregnant and expecting a baby in the summer. In a hand-written statement faxed to the media, she said she is six months pregnant and won’t be taking on more new work this year. But she hinted that she plans to continue her career after becoming a mother. Her final pre-maternity gig was to film TV commercials for the Shiseido skin whitening brand “Haku.” The CM will air from early April.

After playing the role of a mother of four in the 2007 movie “Life – Tengokude Kimini Aetara,” Itoh said, “If I get married, I’d like to have lots of kids.” She married Enomoto Yoshinori (42), CEO of major pachinko company Kyoraku Sangyo, last November after a one-year romance, and they held a church wedding and reception in Hawaii.