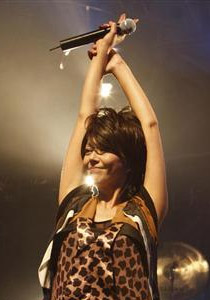 Among the performers at the weekend’s major Summer Sonic rock festival was a familiar but unexpected face. Many in the festival crowd were not born when Koizumi Kyoko‘s major hit “Nantettatte Aidoru” was released in 1985, and she hadn’t sung the number in more than 15 years. She arranged open auditions to assemble a 21-member brass section specially for the number, and got a rapturous reception from the 5,000 who gathered to watch her early morning performance. Though she has been more of an actress than a singer for many years – her last concert was a year and a half ago – Koizumi (42) is still best known as “Kyon-Kyon”, one of Japan’s first and most popular idol singers. And she wasn’t the only blast from the past at the weekend event held in Makuhari, east of Tokyo, and Osaka. In addition to the current chart toppers like Coldplay and Alicia Keys were names like the Sex Pistols, Devo and The Jesus and Mary Chain. The Japan Zone award for best band name is shared by Dallas group Forever the Sickest Kids and locals Maximum the Hormone!

• X Japan vocalist Toshi (42) and his new band performed for the first time on Saturday night. “Toshi with T-Earth” played four songs, including “Fire City,” for 300 fans at the Rockmaykan club in Tokyo’s Meguro, a venue where X Japan performed before making their major label debut. The band kick off a nationwide tour on Tuesday, with Luna Sea drummer Shinya scheduled to join them for the latter half. They are also scheduled to perform in Sao Paulo, Brazil on October 10, Toshi’s birthday.

• The “Gorgeous Kano Sisters” are now officially anime characters. And for once, surrounded by cosplay fans of all kinds at the weekend’s “Otakon” convention in Baltimore, they didn’t look quite so out of place. The pair were at the event to launch the “Abunai Sisters” DVD, which features ten 3-minute episodes of the busty crime-fighters Koko and Mika. Presumably it was decided that elder sister Kyoko needed a simpler name for the non-Japanese audience. The animated heroines were created by Matsushita Susumu, one of Japan’s leading character designers. The DVD is being sold by pre-order via a group buying service. This means that the more copies are ordered, the cheaper they become, a handy safety net for a product likely to appeal only to the unpredictable otaku crowd.

• “Detroit Metal City,” the Matsuyama Kenichi rock comedy vehicle, has been invited to screen at two international film festivals in Canada: in Toronto in September and Montreal in October. Matsuyama (23) and co-star Kato Rosa (23) attended a talk event held yesterday at the Shibuya branch of Tower Records in Tokyo, which was used as a location in the movie.