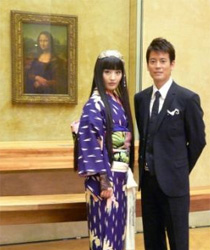 The Louvre museum in Paris yesterday allowed the first ever PR event in front of the Mona Lisa for the Japanese movie “20-seiki Shonen” (20th Century Boys). The manga adaptation was also the first Japanese movie to have its world premiere in the French capital, screening at the Publicis CinÃ©ma on the Champs ElysÃ©es. Star Karasawa Toshiaki (45) and actress Tokiwa Takako (36) had visited the Louvre before but never had the Mona Lisa to themselves. Well, apart from museum personnel and about 80 reporters. Security was tight and cameras were strictly prohibited from shooting any artwork other than the da Vinci masterpiece. Toikiwa was something of a work of art herself, wearing a bright purple kimono. “20th Century Boys” is a three-part adaptation of a hit manga series that sold over 20 million copies. There are already plans to screen the movie, which opens in Japan on August 30, in more than 20 countries.

• At last night’s Japan premiere of “Sex and the City” actresses Fujiwara Norika (37) and Itoh Misaki (31) wore the wedding dresses featured in the movie. Director Michael Patrick King said he wants to make his next movie in Tokyo and work with the two Japanese beauties. Also at the event were pop group Max, with Aki (27) making one of her last appearances as a member before she quits at the end of this month.

• An update to yesterday’s story about the engagement of actress Hatano Hiroko (32) and J-League star Suzuki Keita (27). Both of them made official statements yesterday, with Hatano revealing that she is pregnant and has stepped down from her role in an upcoming TV Asahi drama series. She was set to reprise her role in “Salaryman Kintaro,” the drama in which she made her debut in 1999. Suzuki didn’t update his blog until after the international friendly between Japan and Uruguay, though he was on the bench for the game. Any wedding plans will have to fit into a busy schedule for the star midfielder. He is expected to play in next month’s final World Cup qualifier against Bahrain and also has the upcoming Asian Champions League with his club team, Urawa Reds.