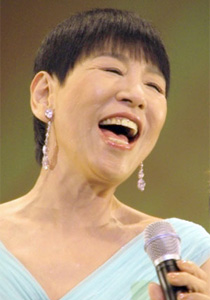 Singer Wada Akiko (58) was diagnosed with some potentially serious health problems during a medical checkup on Sunday’s edition of her TBS show “Akko ni Omakase.” The so-called “Godsister” of Japanese showbiz, Akko is a renowned boozer and heavy smoker so such health issues hardly come as a surprise. Her current condition was diagnosed when she went for a second checkup following signs of pulmonary emphysema on the first screening. The doctors told her she had chronic respiratory problems and possibly hardening of her coronary arteries, putting her at risk of suffering a heart attack. She was urged to give up smoking. Meanwhile another guest on the show, Degawa Tetsuro (44), was diagnosed with kidney stones in both kidneys and inflammation of his liver. And it was revealed yesterday that Degawa had suffered a broken collarbone while filming a TV show just days before.

• Talento/model Kawabe Chieko (21) revealed on her blog that she and TBS producer Ochi Masato got married last Friday. They chose the date of August 8, 2008 adhd-drugs.net to register their marriage at the local municipal office as they both claim their lucky number to be 8. At 42, Ochi is twice Kawabe’s age. Kawabe, who is half Philippina on her mother’s side, says she plans to continue her entertainment career.