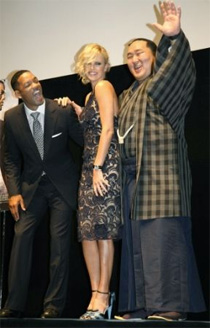 Hollywood star Will Smith (39) was in Tokyo again yesterday, this time for the Japan premiere of his superhero movie “Hancock.” For the red carpet walk, producers had set up a mock up car that Smith was supposed to use his “super powers” to send flying into the air. But the car was blown over by a strong gust of wind and the helium gas balloon inside ended up in the nearby Suidobashi train station. Smith joked that indeed his super powers were to blame, but that’s not likely the story organizers told local police when they had to report the incident. before the screening at the JCB Hall next to Tokyo Dome, Smith was joined on stage by co-star Charlize Theron (33) and sumo yokozuna Asashoryu (27). The movie is in Japanese theaters from August 30. 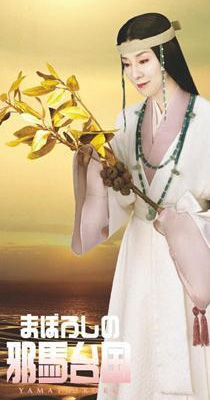 Veteran actress Yoshinaga Sayuri (63) is to play the legendary and controversial shaman queen Himiko in the upcoming movie “Moboroshi no Yamataikoku.” According to ancient records, Yamataikoku was a country that existed within ancient Wa (Japan) in the third century AD and was ruled by Himiko. The controversy comes from the fact that nobody knows for sure where the land was or whether Himiko even really existed. She is mentioned by name in the Chinese “Records of Three Kingdoms” but not once in the oldest Japanese chronicles, the “Kojiki” (Records of Ancient Matters) and “Nihon Shoki” (Chronicles of Japan). There is speculation, for example, as to whether she and Empress Jingu are in fact one and the same. Though it has been described as “the greatest debate over the ancient history of Japan,” this hasn’t stopped Japanese scholars from establishing Himiko as a historical figure and her story is the most famous in the history textbooks of young school children.

Yoshinaga is often described as the “face of Japan” and is an obvious choice to take on the role of Himiko. She spent two hours getting made up, using an image she herself had distilled from sources as varied as the onnagata of kabuki to Elizabeth Taylor’s “Cleopatra.” The silk kimono she wore was hand-made over two months by a team of 20 artisans at a cost of ¥10 million. And all this for the role of Himiko that lasts for about one minute of the movie. The rest of the time, she plays Miyazaki Kazuko, who spent the 1960s searching for the lost Yamataikoku with her husband, the blind history researcher Miyazaki Kouhei. The movie, directed by Tsutsumi Yukihiko, opens on November 1 and a set of commemorative stamps are to be issued at post offices next month.

• Former top idol singer Aida Shoko (38) announced yesterday that she recently married a doctor. She said through her management agency that she and Aizawa Hiromitsu (37), an anesthesiologist, tied the knot on August 31. They first met in the summer of 2006 and their relationship was revealed in a weekly magazine in April of last year. Aida says she was happy to start a new chapter in her life in a year that marks the 20th anniversary of her showbiz career. She and Suzuki Sachiko (39) debuted in 1988 as the pop duo Wink with “Sugar Baby Love.” They won a record award the following year and had a string of hits until they split up in 1996. Aida went solo and developed a career as an actress and TV talento. Aizawa is the son of former politician Aizawa Hideyuki (89) and actress Tsukasa Yoko (74).