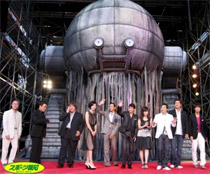 The serious PR has started for the movie adaptation of “20-Seiki Shonen” (20th Century Boys). A post-production event was held last night at the Roppongi Hills complex in central Tokyo for the first of the three movie installments, which opens in theaters on August 30. As we reported back in February, the movie has a star-studded cast, and they were all called out for yesterday’s event. But stealing the show was a 9m high reproduction of the movie’s robot. The Toei studio is said to have shelled out about ¥40 million for the PR event, with most of that being the cost of the robot. As it’s CG-generated in the movie, the cast were seeing it “in the flesh” for the first time. Star Karasawa Toshiaki (45) described it simply: “It’s intense!” The movies are based on the sci-fi drama manga that ran in the “Big Comic Spirits” magazine from 1999 to 2006. There have been distribution negotiations in more 20 countries worldwide, and the movies are likely to be bigger than the recent “Death Note” series. Servers for the official website (http://www.20thboys.com) have been overwhelmed in the last couple of days.

• Actress Katsumura Mika (28) revealed on her blog yesterday that she has divorced from actor and former Johnny’s Jimusho idol Tomoi Yusuke (28). The couple married in January 2006 and had a baby girl the following August. Katsumura filed the divorce papers in June and has custody of their daughter. Tomoi made his debut with kansai Johnny’s Jr back in 1994. He had a major supporting role in the “Kamen Rider Agito” tokusatsu series in 2000 and a Godzilla movie in 2002, but has since dropped in and out of showbiz.