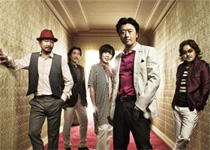 Southern All Stars brought another chapter of their long career to an emotional close yesterday. They left many of the 70,000 fans in tears after the last of four shows at Nissan Stadium in Yokohama, and what could possibly be their last concert performance. Japan’s most popular band and in their commemorative 30th year, they said back in May that they’ll be taking an open-ended break from 2009. They currently have no official plans to perform again this year, but frontman Kuwata Keisuke made vague reassuring comments suggesting they would return in the future in some form. After a set that included 46 songs and was performed in the rain, Kuwata and his wife, keyboard player Hara Yuko, shed a few tears themselves as they thanked the fans for their many years of support. The band’s latest single, “I Am Your Singer,” is currently on top of the charts.

• Johnny’s Jimusho announced yesterday that SMAP‘s upcoming nationwide dome tour will start with six nights at Tokyo Dome. The September 24-26 and 28-30 shows will be most ever at the venue by a Japanese artist, beating rockers Glay who played five nights there in 1999. A new album will go on sale on the day of the first show. “Super.Modern.Artistic.Performance” features collaborations with Burt Baccarach and the Black Eyed Peas’ Will.i.am. The group usually tour in the summer but have been busy this year with Olympic-related projects for TBS, including the network’s Olympic theme song “Kono Toki, Kitto Yume Ja Nai”.

• A couple of veteran rockers recently announced upcoming visits to this country. The “Godfather of Heavy Metal,” Ozzy Osbourne (59), will be here in October for his first Japan show in six and a half years. Fittingly, the October 27 venue will be the venerable Nippon Budokan. And Jackson Browne (59) will have a show in Osaka and two in Tokyo in late November. He turns 60 in October, while Osbourne has his “kanreki” (60th birthday, when Japanese people traditionally wear red) in December.

• Arriving a bit earlier will be Hollywood star Robert Downey Jr. He’ll be in Tokyo on September 2 to promote “Ironman,” the superhero flick that has relaunched his once glittering career. He was last in Japan at the height of that fame in 1993, when he was promoting his Oscar-nominated role in “Chaplin.” Clearly, Japan’s policy of not allowing convicted drug offenders into the country is a thing of the past.