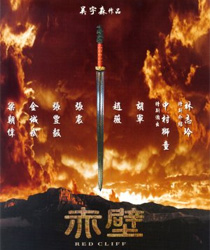 John Woo’s spectacular Chinese epic “Red Cliff” is to open this year’s 21st Tokyo International Film Festival on October 18. The production is the biggest movie ever made in Asia, with a budget estimated at ¥8 billion ($80 million), though it was beset by more than a few casting problems. It has already recouped much of that, appearing in theaters across Asia in early July and setting a new opening-day box office record in China. “Red Cliff” is based on a one of the most famous battles in Chinese history, in which a million soldiers fought and thousands of ships were burnt. The biggest scenes involved 2,000 actors and crew members, and around 1,300 special effects are used. Woo (62) and cast members including star Tony Leung (46) and local actors Kaneshiro Takeshi (34) and Nakamura Shido (35) are expected to walk the red carpet in Tokyo in October. The festival will open with the movie’s first of two parts, which is scheduled to open in Japan on November 1, and runs to two hours and twenty minutes. The second part is expected to open across Asia in December (in Japan in the spring of 2009), at which time a condensed version of the full story will also be released in the West.

• Two of Japan’s celebrated playboys are in the weeklies again. The latest romantic rumors about comedian Tamura Atsushi (34) of the duo London Boots tie him to actress Nakagoshi Noriko (28). The pair were spotted out driving together recently, according to today’s issue of weekly magazine “Friday.” Management for both celebrities insist that they are just friends. And popular kabuki actor Ichikawa Ebizo (30) was recently spotted out on a date by reporters for “Josei Seven” magazine. He has said publicly that he is romantically involved, and the magazine described his latest flame as looking like popular actress Inoue Mao. The two were seen dining out in Tokyo, after which they returned to Ichikawa’s apartment.