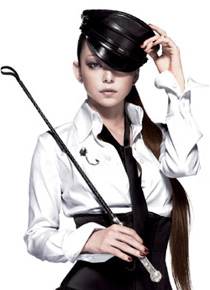 Amuro Namie (30) has become the first artist to have a million-selling album in her teens, twenties and thirties. Her latest hits collection, “Best Fiction,” has been at No.1 on the Oricon album chart since it went on sale July 30 and the latest sales tally is 1.09 million copies, making it the third album this year to break the million barrier. Other artists who have managed to go “platinum” (by the U.S. standard, anyway) in more than one decade include Inoue Yosui (in his 20s and 30s), Utada Hikaru and Nakashima Mika (in their teens and 20s). Amuro debuted in 1992 and was very much a 90s phenomenon, becoming a fashion leader for a whole generation of girls. Though her last million-selling album was 1998’s “181920,” her failed marriage to TRF dancer Sam and motherhood seem to have only broadened her appeal. She is currently top of the lineup of Avex artists on the “a-nation ’08” tour, which she joined this year for the first time, and she has a 16-venue, 40-show arena tour coming up in October. The latest sales figures show that she can still claim to be at the top of the J-pop world.

• The NHK taiga period drama “Atsu-hime” has reached new heights of popularity. The August 17 episode had a superb audience rating of 27.7%, making it the second-most watched show of the week after the hugely anticipated women’s Olympic marathon. The series had already set new high with last week’s rating of 26.4%, and the latest episode featured the first appearance of the key character Kazunomiya, played by popular young actress Horikita Maki (20).

• New Zealand-born singer/songwriter Jay’Ed (26) yesterday announced the release of his second single. The ballad “Zutto Issho” is the follow up to his May debut single “Superwoman.” The song has already done well in download rankings before it’s official release on August 27. Raised in Osaka, Jay’Ed says his new song has the warm island music influence of his other home country.

• Visiting Japan again is Hollywood star Jodie Foster (45), here to promote the movie “Nim’s Island,” which opens in Japan on September 6. Foster, who first visited Japan when she was 12, brought her two young sons with her this time. She said she wants them to have as many experiences as possible while young, but added, “I didn’t know it could get this hot in Japan!”