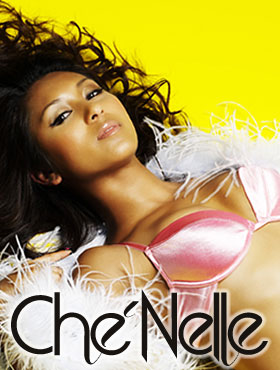 It looks like R&B singer Che’Nelle is getting a serious marketing push. Currently the poster girl for popular lingerie brand Peach John, she performed a mini concert in front of the 109 building in the middle of Shibuya yesterday. She and her back dancers wore Peach John as she performed “First Love,” the song that is currently used in the company’s TV commercials, and “I Fell in Love With the DJ” from a just released special edition of her album “Things Happen For a Reason”. It’s been a year since the album was a hit here, spending two weeks at the top of the Oricon foreign artist chart, and “…DJ” is described by EMI as a “mega hit” and a “girl’s anthem.” Yet the local media can’t seem to agree on Che’Nelle’s background, with some saying she’s from Australia, others calling her an American and none seem to have any idea of her age. She was actually born in 1983 in Malaysia to a Chinese Malaysian father and Indian-Dutch mother, and her real name is Cheryline Lim. She and her family moved to Perth, Australia when she was ten.

She certainly has her young female fans in Japan, where she is called the “R&B Diamond.” Many fans gathered yesterday in front of 109, the fashion mecca where Che’Nelle says she often shops, and no doubt they’ll be heading to Studio Alta in Shinjuku this afternoon, where she’s scheduled to make an appearance on the live “Waratte Iitomo” variety show. 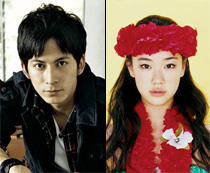 V6 member Okada Junichi (27) and actress Aoi Yu (23) are the latest celebrity couple, according to today’s issue of weekly magazine “Friday.” The pair were recently spotted out shopping together and having dinner at Aoi’s apartment in Tokyo. They were photographed sharing an umbrella, which in Japan is considered the very symbol of a romantic relationship. Management for both stars have refused to comment on the story but Aoi’s agency said they have been friends since working together on the 2005 TBS drama series “Tiger & Dragon.” Sources say they have had an on-again, off-again relationship since then. One of the established Johnny’s Jimusho boy bands, V6 play the National Gymnasium in Tokyo tonight as part of their “2008 Vibes” concert tour. But in addition to his pop career, Okada is also gaining a solid reputation as an actor and is considered a bright prospect for the future. Aoi made her movie debut in 2001 but moved into the spotlight with an acclaimed performance in the 2006 movie “Hula Girls,” which won her several awards.