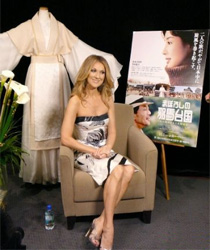 Canadian superstar Celine Dion (40) is to provide the Japanese language theme song for the upcoming movie “Maboroshi no Yamataikoku.” A bilingual version of the song “A World to Believe In,” a duet with local singer Ito Yuna (25), was released as a single by Ito in January. The original was included on Dion’s album “Taking Chances,” but she has recorded a new, totally Japanese version. Meeting with Japanese reporters this week in Montreal (photo), where she is currently on tour, she said she felt it was both an honor and a great responsibility for her to provide the “voice” of one of the most iconic of Japan’s historical figures. “Japanese is a beautiful language,” she said. “I learned the lyrics and their meaning in great detail. But the most important thing is how they sound.”

In the movie, Yoshinaga Sayuri plays the dual roles of a woman helping her blind husband search for Japan’s lost ancient kingdom of Yamataikoku and the legendary shaman queen Himiko who ruled over it. Though her appearance as Himiko is brief, it is the marketing focal point of the movie. This brief but key climactic scene will feature the Dion song and no dialog, no doubt leading to tears in many a Japanese cinema. A Hollywood equivalent would be Jesus appearing at the end of “Titanic” as Wada Akiko belts out “My Heart Will Go On”! Read more about the movie and the queen Himiko.