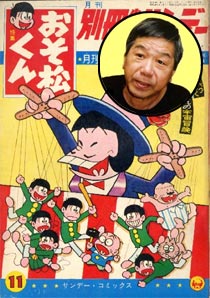 Popular mangaka Akatsuka Fujio died of pneumonia on Saturday afternoon. He was 72. The creator of such famous manga as “Tensai Bakabon” and “Osomatsu-kun,” Akatsuka was considered the pioneer of the so-called “nonsense gag manga.” Born in Manchuria to a soldier and a former geisha, he reurned to Japan after WWII. Influenced by Tezuka Osamu’s manga “Lost World,” he decided to move to Tokyo to take up the profession. From 1962 he wrote manga for the “Shonen Sunday” magazine and had his first major success with “Osamatsu-kun” (photo). He went on to win many top manga awards, and was recognized by the government for his cultural contributions in 1998. Never one to take himself or his work very seriously, that same year he famously enjoyed a glass of whiskey during a press conference to announce that he had cancer. The jokes couldn’t hide that he was an alcoholic, who refused to give up drinking even as he was diagnosed with stomach cancer. But in the intervening ten years he outlived two wives, his first wife passing away just a week ago. Their daughter Rieko is said to be totally devastated by the loss in quick succession of both parents. Akatsuka’s second wife, Machiko, nursed him following a stroke in 2002, but herself died suddenly of a brain hemorrhage in 2006. Akatsuka had friends across a wide spectrum of the showbiz community, and famously first introduced top comedian Tamori to the world of afternoon TV.

• TBS announcer Aoki Yuko (25) has reversed her decision to quit the network. She said during her regular slot as assistant on the “Sunday Japon” morning show that, though she had spent the last month stressed and worried about the decision, she has decided to stay on. Asked whether a magazine story, due to be published today, about an extra-marital affair had anything to do with her stress, she refused to comment. The story claims she’s been having an affair with a married TBS director, and as we reported here last week it wouldn’t be a first for Aoki.

• Singer Kitade Nana (22) made another overseas appearance on Saturday, this time at the AniMagic convention in Bonn, Germany. She performed eleven songs, including her latest “Punk&Babes,” for an audience of about 3,000. The singer, known for her Gothic Lolita (Goth-Loli) fashion, has performed at similar events in Hong Kong, Baltimore and Paris the last four years. She made her European CD debut last month, releasing the album “Cutie Bunny.”

• Hip hop unit Kick The Can Crew made their first appearance in four years at the weekend’s Rock in Japan Festival. During the solo performance by member Kreva (32), he was joined on stage by Little (32) and MCU (35) and the trio performed a couple of their hits.