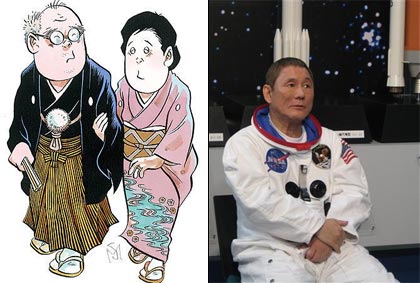 NHK is seeing some more bad audience ratings for dramas this season. The new morning drama series “Gegege no Nyobo” started on Monday. It airs on the NHK General channel at 8am, 15 minutes earlier than usual and the first time slot change in 48 years. But the opening episode had an audience rating of 14.8% in the Kanto region, 10.1% in the Kansai region. These were both the lowest since the morning dramas began in 1964. The previous series “Welcame,” which ended last Saturday, was also reported this week as having continued the trend in record low average ratings.

“Gegege…” is the 82nd drama to be aired by NHK as a “renzoku terebi shosetsu” (serialized TV novel).A movie version is scheduled for theatrical release this autumn. It is based on the autobiography of Mura Nunoe (78), wife of the manga-ka Mizuki Shigeru (88), and will run until September 25. Mizuki is the creator of the hugely popular “Gegege no Kitaro” manga, which has given birth to many anime and movie spinoffs.

Talento Kitano “Beat” Takeshi (63, photo right) spoke out yesterday on the topic of cuts in government funding. Visiting the Tsukuba Space Center of the Japan Aerospace Exploration Agency (JAXA), he strongly criticized the decision to cut public funding to the organization and other scientific research such as a program to develop supercomputers.

The most prominent member of the government team, whose efforts were widely publicized, is former journalist and TV presenter Ren Ho (42). “I shared a hot bath with her when she was talento, so who does she think she is?” he joked. “A country that puts no money into scientific research is screwed.” Asked what he would cut if he were in her position, he said, “The number of Diet members.”

Other half-joking suggestions included requiring prospective politicians to put up ¥5 billion of their own money, or the creation of an equivalent of the House of Lords where wealthy politicians are less likely to become corrupt. His most outlandish idea was to say, “Japanese love foreigners and will do anything they say. So why don’t we give the job of running the Japanese government to someone like Bill Gates, who’s not strapped for money. We could make Mikhail Gorbachev the foreign minister and get the Northern Territories back (from Russia).”

GReeeeN are All Smiles
The four members of successful J-pop group GReeeeN are now all qualified dentists. Soh (29) announced on his blog yesterday that he became the last member to pass the national examination required for all dental practitioners. The four met while studying at a university in Fukushima and continued their studies even as their musical career took off. In order to keep their careers separate, they have never shown their faces in public. They will be featured performing in silhouette in new software to be released for the Nintendo DS on April 1.