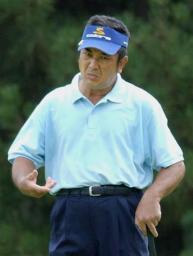 Veteran actor and singer Kobayashi Akira (68) may be rethinking his decision to become a pro golfer. He made his debut as a pro on the senior tour yesterday, the first day of the season-opening PGA Handa Cup. He had a 2m birdie chance at the first hole but after missing it he says he put himself under a lot more pressure. By the end of the round, 11 bogies, 1 double-bogey and 3 triple-bogies left him with an embarrassing score of 94 (22-over) and trailing the field by eleven shots. His wasn’t the worst ever score on the senior tour – at least he managed to stay below 100 – but he was clearly unhappy that his confidence hadn’t produced the expected result. “Like when I’m on stage with a mike in my hand, I started off feeling good. But I hated my own poor performance.” From 1993, Kobayashi played in 23 tournaments as an amateur and the PGA made him an honorary member in February. He practiced hard for his pro debut during the summer despite a busy stage schedule. And a relatively large crowd and two TV cameras turned out at the Ibaraki Golf Club to see his performance. One of Japan’s postwar superstars, Kobayashi has a showbiz career that spans more than 50 years but has been repeatedly in and out of debt. It doesn’t look like golf will be providing him with any financial relief.

• Comedian Matsumoto Kouta (28) recently got into a sexual entanglement with a 16-year-old girl, according to today’s issue of weekly magazine “Friday”. The article says Matsumoto, one half of the popular duo Regular, and a group of other Yoshimoto comedians were at a karaoke facility at the end of August. When Matsumoto, who doesn’t drink, met the girl she told him she was 22 and the pair ended up in a nearby love hotel. Several days later, she called him and told him her true age. When she demanded that he return ¥5,000 she had lent him or she would go to the media, she says he threatened her. Yoshimoto denies all of the girl’s claims.

• Actress Watanabe Eriko (52) has changed her stage name to Watanabe Eri. She made the change on the advice of chanson singer and self-styled spiritualist Miwa Akihiro (72). Miwa told her that the medical problems she had been having since the start of the year would continue as long as she used her old name. Watanabe is currently in rehearsals for a stage production of Stephen King’s “Misery” that opens in Shinjuku tomorrow.