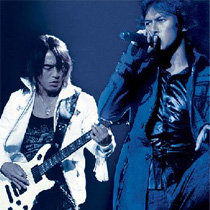 Not only are they Japan’s biggest-selling artists by far, but B’z are huge even by world standards. Sales of over 75 million albums and singles puts them in 7th place in the world, and no one can deny they have earned the right to become the first Asian artists to be inducted on the Hollywood Rock Walk. The announcement today coincides with the 19th anniversary of their debut release and shortly before the release of their 44th single “Super Love Song” on October 3. The duo, vocalist Inaba Koji and guitarist Matsumoto Takahiro, plan to take part in the induction ceremony on November 19. The only Japanese on the Walk to date are businessmen: Kakehashi Ikutarou, founder of instrument maker Roland, and Korg founder Kato Tsutomu. Established in 1985, the Hollywood Rock Walk is a collection of handprints, signatures, and memorabilia from Rock ‘n Roll’s greatest musical performers and innovators, who have contributed the most to forge the integrity and promote the growth of Rock ‘n Roll as an art form. Inductees are chosen through secret ballot by those surviving among the existing 175 honorees, who include Aerosmith, Black Sabbath, Eric Clapton and Van Halen. B’z nomination had some help from inductee and friend Steve Vai, with whom they have performed. The Rock Walk is located on Sunset Boulevard, in the outer lobby of Hollywood’s Guitar Center.

• Fuji TV announcer Masai Maya (30) gave birth to her first child yesterday at a Tokyo hospital. The announcement came from her husband, actor and model Maekawa Yasuyuki (33), now the proud father of a bouncing baby girl.

• Actor Sato Ryuta (27) is dating a 21-year-old “OL” beauty, according to today’s issue of weekly magazine “Friday”. The young lady in question is said to have previously worked on TV but is now an “office lady” or company employee. Sato’s agency clarified that the couple have been dating since the end of last year.