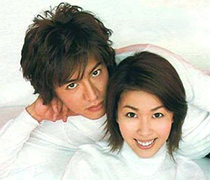 SMAP member Kimura Takuya (34) has been chosen as Japan’s most popular guy for an amazing 14th straight year. The annual survey has been carried out by women’s magazine “anan” since 1988, and Kimutaku has been on top since 1994, the year he came of age. He also has a 13-year streak going in another annual poll as the man most women “would like to sleep with”. He has managed to build a successful acting career in parallel with SMAP’s ongoing popularity. He has starred in just about all the most popular TV dramas of the last decade, and the movie adaptation of one, Fuji TV’s “Hero”, is set to open in theaters this weekend. He has also shown his talent in more ‘serious’ roles, such as the lead in Yamada Yoji‘s 2006 samurai drama “Bushi no Ichibun”. Kimutaku is of course just the brightest in the Johnny’s Jimusho galaxy of male stars, and they make up 18 of the survey’s Top 30 most popular males.

• Popular author Takemoto Nobara (39) was recently arrested for cannabis possession. Takemoto, whose novel “Shimotsuma Monogatari” was made into a successful movie in 2004, was detained by police in the Kabukicho entertainment district of Tokyo on Sunday evening when he was found with 0.22 grams of cannabis in his pocket. He said he started smoking weed while abroad and had brought some back to Japan. More drugs and paraphernalia were later found at his home. Real name Takemoto Toshiaki, he is a successful author of books centering around the world of teenage girls.

• Pop diva Matsuda Seiko (45) is to make her first movie appearance in seven years. She will play the role of the mother in an adaptation of Nosaka Akiyuki’s famous novel “Hotaru no Haka” (Grave of the Fireflies). Filming started yesterday in Awajishima in Hyogo prefecture, and the movie is scheduled to open next summer. The project was to be directed by Kuroki Kazuo (1930-2006), but following his death last year it was taken over by his apprentice, Hyuugaji Tarou (41). The novel, a restrained but powerful antiwar story about a young brother and sister struggling for survival in WWII, was previously adapted into a hugely successful anime feature in 1988.