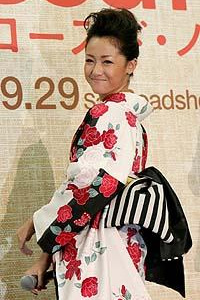 Actress-singer Sawajiri Erika (21) had a pretty good weekend. Her latest single under the stage name Erika has entered the Oricon chart at No.1, making her the only female artist to have their first three releases top the chart. The song “Destination Nowhere” has also been chosen as the theme for the late-night TV Asahi drama “Mop Girl”, due to start on October 12. The popular actress, whose mother is French-Algerian, is also a fashion leader for young women. She went for a twist on the traditional look on Sunday, wearing a rose-themed kimono to a PR event for her upcoming movie “Closed Note”, which opens in theaters on September 29. Sawajiri made her recording debut last year with the hit single “Taiyou no Uta”, from the drama of the same name, but using the stage name Kaoru Amane. In July, she switched to her own first name and had another hit with “Free”, making her only the second female singer to start with consecutive No.1 singles, and the first since top idol Yakushimaru Hiroko (43) in 1983. The circle of coincidence is complete if you remember that Yakushimaru played the mother to Sawajiri’s heroine in her breakthrough drama “1 Littoru no Namida” (1 Litre of Tears) in 2005. The young actress has also found time for romance with a wealthy older IT entrepreneur, as we reported here just a few days ago.

• Actress and former top idol Ohba Kumiko (47) revealed on a TV show yesterday that she and dancer Takahashi Tetsuya (41) have been divorced since December 2005. The couple had been married since 1999. Ohba became a national star in the late 1970s following her leading role in the TV series “Cometto-san”, but retired as a singer in 1979. In the early 1990s her restaurant business failed and huge debts forced her to declare bankruptcy in 1994.

• Ladies of different generations were swooning over the weekend. Veteran French heart throb Alain Delon (71) came all the way to Japan to appear on the Bistro SMAP segment of Fuji TV’s weekly “SMAPxSMAP” show. The segment will air on October 8. Meanwhile, the younger ladies will have their chance at the end of October when British singer James Blunt (33) will visit Japan for the second time. But only 600 fans will be able to attend a free concert in Tokyo, where Blunt will perform songs from his recently released second album “All the Lost Souls”. The event will also feature the first screening in Japan of the documentary “Return to Sarajevo”, in which Blunt returns to the city where he served as a soldier with the British army in 1999.

• Talento Hagimoto Kinichi (66) is making his return to radio. It’s been 19 years since he last hosted the “Kin-Don” show that made him a star. He will return to the Nippon Housou network from October 4 to revive the talk show, though this time the focus will be on his current passion, baseball. He is the owner of the popular amateur team Ibaraki Golden Golds.