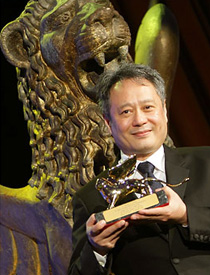 Sex and violence seem to have won the day at the Venice International Film Festival. The prestigious Golden Lion went to Ang Lee for the second time, for “Lust, Caution”, which features long and often violent sex scenes that are rumored to have been real. The Silver Lion was awarded to Brian De Palma for “Redacted”, which features a reenactment of the violent rape and murder of an Iraqi girl by U.S. soldiers in 2006. Of the Japanese contenders, Miike Takashi’s “Sukiyaki Western Django” was considered a strong outsider after its official screening received a rapturous standing ovation. But in the end the quirky mix of jidaigeki and spaghetti western was passed over in favor of Taiwanese director Lee’s sexually explicit spy thriller. The win comes just two years after Lee won with “Brokeback Mountain.” Another Japanese entry that missed out was Aoyama Shinji’s “Sad Vacation”, which opened the festival’s Horizons section for cutting edge cinema.

• Actress Daichi Mao (51) and interior designer Morita Yasumichi (39) held a star-studded wedding reception in central Tokyo yesterday. The event was held at the Cotton Club in Marunouchi and attended by such big celebrities as Tachi Hiroshi (57) and Kuroki Hitomi (46), a friend of Daichi since they were both stars with Takarazuka. Both the new bride and groom are divorcees and they married at the end of July in Champagne, France just six months after they started dating. Daichi was formerly married to actor Matsudaira Ken, more recently of “MatsuKen Samba” fame.