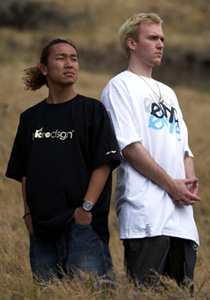 Indie duo Def Tech are breaking up after a highly successful but very short run. In their first year, 2005, they proved that major commercial success is possible in Japan even for an act not signed to a major record label. The pairing of Japan native Micro (27) and Chinese-born Hawaiian Shen (26) were introduced in 2001 by Jesse, vocalist of the rock group Rize, and formed Def Tech in January 2005 (other occasional members were Playa T and Lafa Taylor). Signed to the Hawaiian production company Vice Versa Entertainment, they created a new genre for themselves, dubbed “Jawaiian Reggae” (Japanese + Hawaiian + Reggae). The song “My Way”, taken from their eponymous debut album, was used in a TV commercial and sold over 2.2 million copies. They were the third best-selling artists of 2005 and were invited to appear on NHK’s annual Kohaku Uta Gassen on New Year’s Eve. But a nationwide tour in 2006 exposed musical differences between Micro and Shen, and the latter returned to Hawaii. In November 2006, Micro announced at Shen’s wedding reception in Tokyo that Def Tech wouldn’t break up, but the reunion never happened. The decision to make the split formal was made at the beginning of this month. Shen is the son of renowned applied linguist JD Brown, with whom he often visited Japan in his youth. He is planning to make his major label debut next year. Tokyo native Micro, whose real name is Nishimiya Yuki formed the Primary Color Recordz label under the Universal Music umbrella in February 2007.