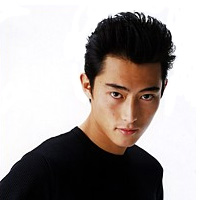 The eldest son of actor Okazaki Jiro was arrested yesterday for attempted murder. Okazaki Rei (28) gave himself up to police in central Tokyo and was held on suspicion of having stabbed a 52-year-old movie producer at a nearby production company office. The victim was stabbed twice, in the thigh and groin, with a 10cm mountaineering knife. The attack was related to a dispute between the two that has been ongoing since Okazaki was fired from the company six months ago. He visited the office to ask for work but the producer continued speaking on the phone. Okazaki attacked the man because, “I thought he was ignoring me.” Real name Kuraoka Hiroyuki, Okazaki has appeared mostly in so-called “V-cinema”, or direct to video, crime movies. The elder Okazaki (63) had a small part in the classic 1982 Sci-Fi movie “Bladerunner”.

• Comedian Monkeekee (38) and talento Yamakawa Erika (25) left Japan for their Hawaiian wedding yesterday. The couple married earlier in the year but didn’t have a ceremony. They will be spending a week in Hawaii with family.

• In this year’s silly award season, KAT-TUN member Kamenashi Kazuya (21) and pop singer Koda Kumi (24) have repeated as “Best Jeanists”. The award is given each year to celebrities who are judged to look best in jeans. The men’s award was perennially won by one or other member of SMAP until they were put into the Hal of Fame. But Kamenashi has kept the tradition of a Johnny’s Jimusho winner alive.