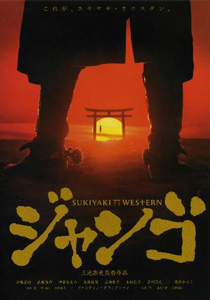 Miike Takashi’s “Sukiyaki Western Django” was screened for the press and general public yesterday (Japan time), receiving totally opposite reactions. During the press screening, a number of people left the theater during the first half of the movie and afterwards there was only a sprinkling of applause. Later that evening the general public got their look at the movie, and showered the mix of spaghetti western and Japanese period drama with tumultuous applause. Some were no doubt delighted to see festival favorite Quentin Tarantino (44), who makes a cameo appearance. And though the rest of the cast is Japanese, including top comedian Ishibashi Takaaki (45, best known abroad for his role in 1994’s “Major League II”), the dialog is entirely in English. Asked at a press conference why a Japanese director would possibly want to make a “macaroni western” (as they are known in Japan), Miike (47) said, “When I was growing up, spaghetti westerns were in their heyday. We played with toy guns and naturally wanted to make this kind of movie when we grew up.” Star Itoh Hideaki (32) said, “Though I don’t speak the language at all, this experience made me want to do another movie in English.” When he added, “And I’d really like to make another spaghetti western in Japan, but this time in Italian,” he was warmly applauded by local reporters. Django is Miike’s fourth movie to be shown at Venice, but is his first competitive entry. The winner of the Golden Lion award will be announced on September 8.