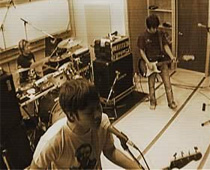 Okinawan rock trio Mongol 800 have taken part in their first TV documentary. The three Urasoe High School friends took the music world by storm in 2001 when the independent label album “Message” made No.1 on the Oricon charts and racked up a phenomenal sales total of 3 million. But despite their huge success, they refused to appear on TV and even turned down an invitation to the annual New Year’s Eve Kohaku show on NHK in 2002. It wasn’t until they were in the editing room in July working on a DVD project that they became interested in the visual side of their work. Once again it was NHK who approached them about filming their July-August tour of southern Japan. “Monpachi”, as they are known to fans, toured 10 locations in Kagoshima and the outlying Okinawan islands. Playing in small venues such as hotel reception rooms and public halls, they had to deal with blackouts and turbulent tropical weather. The documentary will air in the 10pm “Premium 10” slot on September 21.

• Popular actors Matsumoto Koshiro (65) and Ichikawa Somegoro (34) attended a PR event yesterday for their upcoming joint production. The kabuki double-header at the National Theater will feature Matsumoto in “Heike Nyogonoshima” and Ichikawa in the first major production of “Mukashigatari Uguisuzuka” in 78 years. The production will run from October 3 to 27.