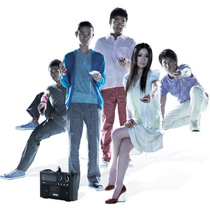 Tokyo Jihen, the rock band fronted by singer Shiina Ringo (28), are to provide their first movie track. The song “Kingyou no Hako” (The Goldfish Box), taken from the band’s upcoming album “Goraku”, was written by keyboard player Izawa Ichiyou (31) and will be used as the ending theme for the thriller “Mouryou no Hako” (The title translates roughly as A Box of Evil Spirits). Directed by Harada Masato, the movie is the second in a trilogy and follows 2005’s “Ubume no Natsu”. It has a stellar cast that includes Tsutsumi Shinichi, Abe Hiroshi, Shiina Kippei, Kuroki Hitomi, and Tanaka Rena. is based on the bestseller of the same name by Kyougoku Natsuhiko, and Shiina is known to be a big fan of his work. She remembers how reading his novels while commuting was the only real pleasure she had when she first came to Tokyo. Izawa says he had already written the song when he was approached about the project and was amazed by how it seemed to fit the story so well. Only then did he read the novel for the first time. Shiina has previously provided movie music as a solo artist for last year’s “Sakuran”. “Goraku” goes on sale September 26 and “Mouryou no Hako” opens on December 22.

“Oshiri Kajiri Mushi” is the latest silly kids song to make the Oricon Top 10 and is currently sitting at No.8. The title translates as “Butt-Biting Bug” and that’s basically what it’s about. It’s popularity is helped by an annoyingly catchy chorus and a funny video. The song aired during preschool kids’ shows on NHK’s educational channel, which has launched several similar hits over the years. The biggest was definitely “Dango San Kyodai” (The Three Brothers Dango) in 1999, which became one of Japan’s best-selling singles of all time.