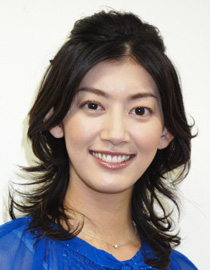 Popular actress Sato Aiko got married yesterday, her 30th birthday. She and Numata Takuma (29), a riding instructor and the son of a riding club owner, registered their marriage at a town hall in Chiba Prefecture and then faxed the news to the media. They plan to hold a wedding ceremony and reception next spring. The couple met in June 2006, when Sato took up horse riding after experiencing it for the first time on a TV variety show. She says she plans to continue working, and fittingly her first job is as a guest on an NHK Satellite horse racing broadcast. Sato won a nationwide beauty contest at the age of 15 and made her acting debut the following year. She has been a popular star of movies, dramas, variety shows and TV commercials for the last decade.

• In her latest setback, enka singer Mori Masako (48) has been hospitalized with acute pneumonia and has had to cancel several concert dates. She made a dramatic comeback last summer after an attempted suicide and divorce in 2005 brought a messy end to her long marriage to singer Mori Shinichi (59). In 1986, that marriage had effectively snuffed out a blossoming singing career that promised to make her one of Japan’s greatest stars. After the split, she threw herself back into her career with a frantic schedule of concerts, TV drama roles, and PR events that finally seems to have taken its toll. She’s due to release her 3rd comeback single on October 3 and has many TV and radio appearances booked.

• Actor Namioka Kazuki (29) revealed yesterday that he is not only married but also the father of one child. He wrote on his blog that he and his wife met while studying at Waseda University and dated for five years. They tied the knot in November 2006 and held a ceremony in her hometown of Fukuoka on New Year’s Day. They had a baby girl on September 24. Namioka is known for TV action hero “tokusatsu” roles, such as Shiro Jin’no/Demon Knight in “Genseishin Justirisers” and Shishimaru/Lion-Maru in “Lion-Maru G”. He has appeared in movies such as “Pacchigi!”, “Densha Otoko” and “The Fast and The Furious: Tokyo Drift”.

• Talento Kubo Keiko (35) is finally pregnant. After a year of fertility treatment, the former Fuji TV weather girl announced the happy news that she is expecting her first child next February. She and JBL Super League basketball player Kita Takuya (35) married in May 2006.