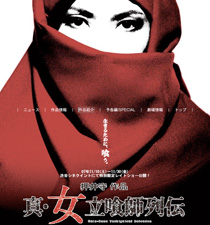 The latest live-action movie from iconic director Oshii Mamoru (56) is another segment in his ongoing lifework, the Kerberos Saga. An omnibus movie in six parts, “Shin Onna Tachiguishi Retsuden” is quite a mouthful, appropriately enough as the women of the title are “Female Fast Food Grifters”. These tachiguishi (literally “masters of eating on the go”) have featured in much of Oshii’s work all the way back to the TV anime version of “Urusei Yatsura” in 1984. Some of the works, which can be in anime, live-action or manga format, are limited release or direct-to-DVD. The latest movie will be screened at the 20th Tokyo International Film Festival in October, and features top actress Mizuno Miki (33) in her first shoot-em-up action role. But the movie will only have a limited run at one cinema from November 10. Alongside his old friend and fellow animator Miyazaki Hayao, Oshii is definitely the less commercial, though his 1995 classic “Ghost in the Shell” and its 2004 sequel “Innocence” won him wide international acclaim.

• Pop diva Matsuda Seiko (45) is to make her first movie appearance in seven years. She will play the mother in a live-action adaptation of Nosaka Akiyuki’s novel “Hotaru no Haka” (Grave of the Fireflies). The restrained but powerful antiwar story of two young children struggling to survive in WWII Kobe was adapted as an acclaimed anime movie in 1988.