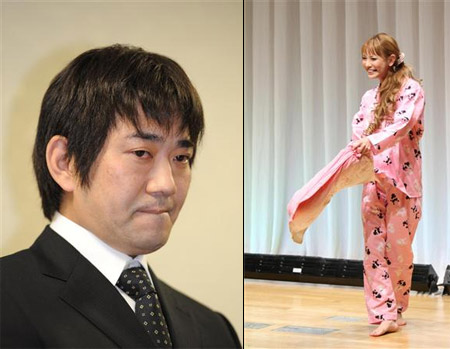 It looks like comedian Kuroda Tamotsu (39, photo left) has largely got off the hook following his recent arrest for assault. He was released by the Osaka District Court yesterday, and was totally serious several hours later at a press conference at the company headquarters of Yoshimoto Kogyo. Dressed somberly in a black suit and tie, Kuroda apologized to the victim of his drunken attack as well as his own fans. One half of the manzai duo Messenger, Kuroda said that he had also met and apologized to his comic partner while in custody. As by reporters about a return to work, he said, “It’s not my decision to make. First I have to repay those who I inconvenienced. But I hope to someday be able to make people laugh again.” Yoshimoto Creative Agency president Mizukami Haruki said that the comedian’s future plans were blank and that he would be disciplined.

Kuroda and a friend were arrested in late December after a night out on the town ended in violence. Kuroda had a beer and a highball at one bar, before heading to a “girly bar,” where he had another beer and seven more highballs. The trouble started when Kuroda was presented with what he thought was an outlandish bill for ¥255,000 (about $2,800). He threw an ashtray at the bar manager (24) and punched and kicked him several times. The manager was initially reported to have suffered broken bones, though it was later revealed that the injuries pre-dated the assault. Kuroda and the manager met last week and reached a settlement, allowing the indictment against the comedian to be dropped yesterday.

• On a lighter note, talento Uehara Sakura (32, photo right) made her comedy debut yesterday. She appeared in the first round of the R-1 Grand Prix, an annual contest for solo comedians. With material based on her divorce last November, she got enough laughs to get through to the next round, which will be held at the end of the month. 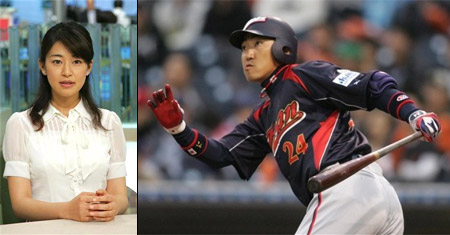 Fuji TV announcer Nagano Tsubasa (28) sent a fax to the media this morning about her upcoming marriage plans. She and Uchikawa Seiichi (27), an infielder for the Yokohama Bay Stars and Japan national baseball teams, plan to hold their official engagement ceremony this month and tie the knot on March 24. They don’t currently have plans to hold a wedding ceremony or reception. Romance started for the couple when they met during last year’s World Baseball Classic, where Japan defended its title thanks in large part to Uchikawa’s solid batting.