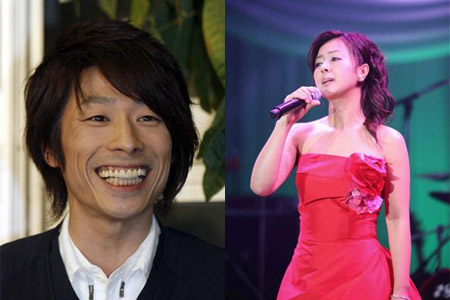 Comedian Tamura Atsushi (36, photo left) was all smiles yesterday as he formally acknowledged his reported romance with J-pop star Amuro Namie (32). Tamura spoke to reporters in the lobby of the Yoshimoto Kogyo offices in Shinjuku, Tokyo, shortly after his return from a vacation with Amuro in the U.S. “We really stimulate each other. And I feel very relaxed when we’re together,” he said. Asked if they had plans to marry, he pointed out that their relationship had only just started but added in his usual frank style, “As things develop, if those kind of feelings grow…” Amuro of course has been down that road before and has an 11-year-old son from her marriage to TRF member Sam (47), while Tamura has been involved in a string of romances with other celebrities. Some commentators have described the couple as “unbalanced” but they have both matured into solid careers and Japan Zone wishes them all the best.
Earlier story:
Atsushi, Amuro Get Some Sedona Healing (Jan. 6, 2009)

• Actress Yakushimaru Hiroko (45, photo right) gave her first concert in almost 20 years at the Grand Prince Hotel Akasaka in central Tokyo last night. Some 1,000 fans were treated to such hits as “Sailor-fuku to Kikanju” and “Tantei Monogatari” from her early 1980s heyday as one of Japan’s top idol singers. She was also joined by actor Toyokawa Etsushi (47) and director Yukisada Isao (41) to talk about their upcoming movie “Kondo wa Aisaika.” 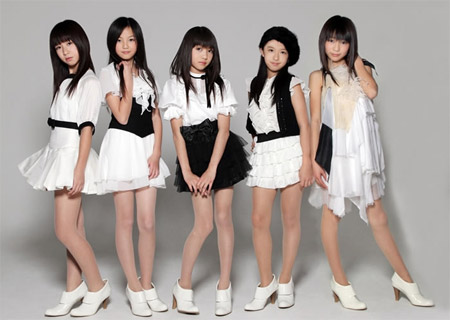 Tokyo Joshiryu (aka Tokyo Girls’ Style) are the latest tween idol group on the block. The five members of the new group were named, one per days, over the first week of January and their website officially launched on Wednesday. The group is the latest creation from Avex, the record company behind such major J-pop superstars as Hamasaki Ayumi and Koda Kumi. It’s the record company’s first new girl group since SweetS in 2003. The group consists of leader Yamabe Miyu, Konishi Ayano, Arai Hitomi, Nakae Yuri, and Shoji Mei, all between the ages of 11 and 13. They will make their live debut February 7 at Shibuya O-Nest in Tokyo. Though they have no CD release scheduled as yet, they will be active in social media, with a blog and accounts on Twitter and the biggest Japanese SNS site, Mixi.

• NHK has announced details of the new morning drama series that will air from September. “Teppan” is the story of a teenage girl who, with the help of her grandmother, decides to open an okonomiyaki restaurant. It will be set in the cities of Osaka and Onomichi in Hiroshima Prefecture. Onomichi is famous for a trilogy of movies made in the 1980s by Ohbayashi Nobuhiko (71), and is where Ozu Yasujiro’s 1953 classic “Tokyo Monogatari” was filmed. Auditions will be held until March for the lead role and filming is expected to start in mid-May.