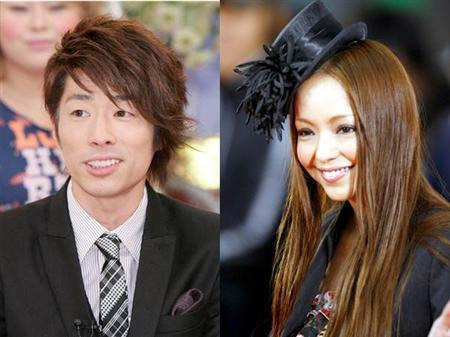 J-pop star Amuro Namie (32, profile) and Yoshimoto comedian Tamura Atsushi (36) are the latest Japanese showbiz “power couple,” according to today’s issue of women’s weekly magazine “Josei Seven.” Though they left Japan on separate flights to Los Angeles at the end of December, the pair were spotted on a flight to Phoenix. From there they headed to the spectacular scenery of Sedona, Arizona. During their 9-day trip, the couple were seen holding hands and cuddling so there is little doubt that they are in a relationship, but their respective management agencies refused to comment. One half of the comedy duo London Boots No.1 No.2 (profile), Tamura has been popular with the ladies for many years and has had romances with the likes of talentos Fujisaki Nanako (32) and Wakatsuki Chinatsu (25), and actress Nakagoshi Noriko (30). A relationship with an “ippanjin” (someone not in showbiz) ended last September. He and Amuro met at a mutual friend’s house party last summer. Amuro has had a roller coaster career, starting at the Okinawa Actors School before she hit her teens. She rode the Eurobeat wave in the early 1990s and was at the peak of her solo success in 1997 when, at the age of 20, she became pregnant and married TRF dancer Sam (47). She continued her career, even overcoming the murder of her mother in 1999 and divorce in 2002. Her popularity has been resurgent in the last couple of years, helped partly by her image as a working single mother.

• In a world first, satellite channel Wowow have announced that they will be showing the entire James Bond movie series during the spring. Due to the complicated nature of the rights to the 22 movies, they have never been broadcast in one go. Wowow will show two movies every Saturday and Sunday afternoon from March 21 to April 28, and then the whole series continuously between April 29 and May 1.