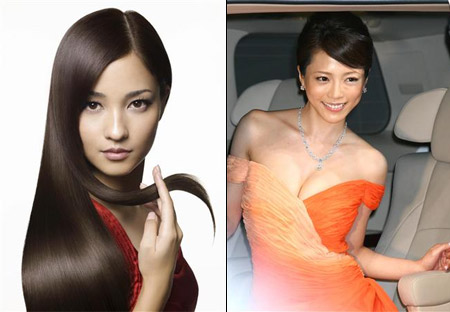 Actress Kuroki Meisa (21, photo left) is to become the global face of French cosmetics giant L’OrÃ©al Paris. It was announced yesterday that she recently signed a contract to appear in advertisements and TV commercials for the brand around the world, a job that has previously gone to such top Hollywood names as Penelope Cruz, Beyonce Knowles and Jane Fonda. The only other Japanese woman to have landed the gig was model Kawahara Ayako (38). Kuroki will first appear in commercials for the new Damage Care Proex line of products in the spring.

Vianney Derville, L’OrÃ©al’s International General Manager, saw Kuroki in her international big screen debut, last year’s Japanese-Chinese movie “Subaru.” Describing the Okinawa-born actress he said, “Her appeal lies in her natural talent, her elegance and her beauty.” Kuroki had a breakthrough year in Japan in 2009 and is now headed for the world stage. “I hope to become someone who can support Japanese women and be on a par with the other women of the world. I’d like to show the world the beauty of Japanese women.”

• Management for Shaku Yumiko (31, photo right) acknowledged yesterday that she is on the verge of marriage to a handsome Tokyo vet. The popular actress and Sato Takanori (31), head of a veterinary clinic in the posh Tokyo suburb of Shiragane, have been dating since last autumn. Tommy’s Artist Company president Kobayashi Kenji, himself a former Johnny’s Jimuso idol, said “It’s true that (Shaku) is in a serious relationship. She is 31 so any decision about marriage is hers to make. But I think that’s where she’s headed.” 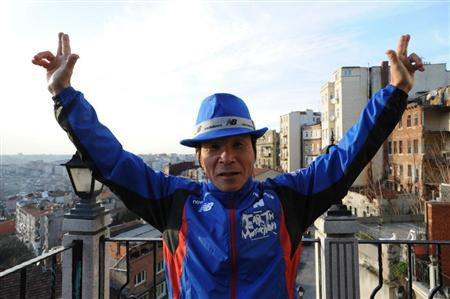 Hazama Kampei isn’t going to let a little thing like cancer stop him from running round the world. The Yoshimoto comedian recently made a hospital visit in Istanbul for a scheduled checkup as part of his Earth Marathon, an attempt to run and sail around the globe. After having sailed across the Pacific and Atlantic, and run across the North American and European continents, he was shocked when test results showed that he has prostate cancer. He revealed the illness for the first time on his blog yesterday.

The shocking news came almost a year after Hazama (60) was diagnosed with high levels of PSA, a protein produced by the cells of the prostate gland, following tests in Los Angeles. Doctors diagnosed it as a prostate infection and he was given antibiotics. Subsequent tests in cities across the U.S. and Europe indicated the problem was under control, though Hazama was still taking the medication. After the test in Istanbul revealed excessive levels of PSA, doctors recommended further tests. But Hazama insisted on continuing to Ankara and reaching the 10,000km mark in his global quest on New Year’s Eve, before returning to Istanbul. He underwent more tests and was given the bad news on January 4.

“For about a week I was really worried,” he said. “Could I finish the Earth Marathon? Could I beat this disease? Would I die? At times I couldn’t sleeping from worrying about it.” But after the test data was shared with doctors in the U.S. and Japan, it was decided that rather than undergo surgery he could be treated with hormone therapy that would keep the cancer in check and allow him to continue his quest. “I was incredibly happy,” he said, announcing that he would resume his journey from tomorrow. He hopes to arrive back in Osaka sometime between this autumn and the spring of 2011.