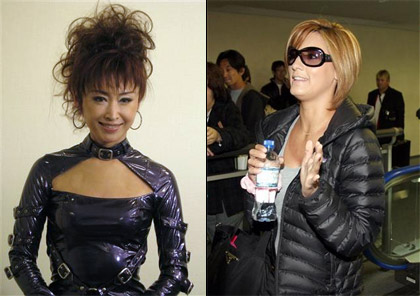 A couple of stories today showing that it’s not just the guys who go for younger partners. Actress Mihara Junko (45, photo left) may soon be tying the knot yet again, according to today’s issue of weekly magazine “Friday.” Her management has acknowledged that she is in a serious relationship with theater director Suenaga Yoshihiro (38). They said that romance started after she appeared in one of his stage productions in Tokyo last October.

Mihara married a racing driver in 1990, but they divorced in May 1999. Six months later, she was married to comedian Happy Happy (42). That marriage also ended in divorce in 2007. Mihara has suffered several miscarriages and had her womb surgically removed in 2008 after she was diagnosed with cervical cancer. Suenaga is also a divorcee and has custody of a young daughter, who has been seen referring to Mihara as “Mama.”

• Meanwhile, talento Umemiya Anna (37, photo right) has acknowledged her romance with top American Football player Nakajima Yu (28). Returning from a location shoot in Australia, she spoke with reporters at Narita Airport yesterday. She said the relationship started just last December so it was too early to think about marriage. Umemiya has an 8-year-old daughter from a previous short-lived marriage. Nakajima is a wide receiver for the Kirin Beer Silver Star team in the X League and has represented Japan.

Ebizo, Mao to Meet Press
Kabuki star Ichikawa Ebizo (32) and freelance TV announcer Kobayashi Mao (27) are scheduled to give a press conference today to formally announce their engagement. The couple’s relationship was first revealed last November and their engagement ceremony took place at the Hotel Okura in Tokyo in December. But today’s event, also at a Tokyo hotel, will be their first appearance together in public.

Arashi NTV’s New Face of Saturday Night
NTV’s comedy showcase “Enta no Kamisama” is coming to the end of the road, and is being replaced by a variety show featuring Johnny’s Jimusho idol group Arashi. “Enta…” helped launch the careers of several comedians over the last few years but has been canceled from the end of March. Taking over the Saturday 10pm slot will be the five members of Arashi, currently riding a wave of huge popularity, in a show tentatively titled “Arashi ni Shiyagare.” The format will be such that the members film each show without knowing the details or who their special guests will be.

A Good Year at the Cinema
The box office numbers are in for 2009, and it was another good year for Japanese movies. There was an increase in total receipts for both domestic and overseas titles. But while 34 Japanese movies made over ¥1 billion, an increase of 6 over 2008, only 23 overseas movies passed that mark. The big Hollywood blockbusters were sequels (“Angels and Demons,” “Terminator 4”), and western movies made a total of ¥88.7 billion (+12.3%), while local productions made ¥117.4 billion (+1.3%). The box office total of ¥206 billion was the second highest on record, behind 2004’s ¥210 billion.