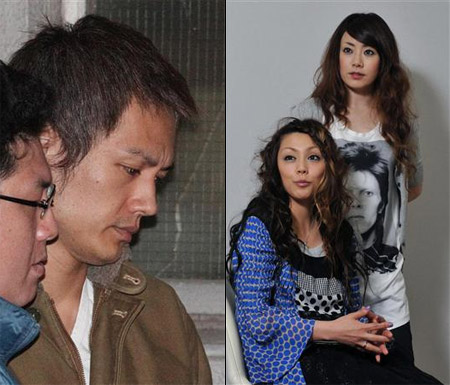 Oshio Manabu (31, photo left) has been arrested again today in an ongoing case of sex, drugs and death. The (now “former”) actor has already been tried and convicted for using MDMA (ecstasy) and received an 18-month prison sentence, suspended for the maximum five years, in early November. He was indicted again shortly before the New Year for supplying the drug on August 2 to 30-year-old Ginza bar hostess Tanaka Kaori, who died shortly afterward at the Roppongi Hills apartment of a friend. His latest arrest is for failing to take appropriate action to save Tanaka – when she lost consciousness, Oshio called his manager rather than the police and an ambulance wasn’t summoned until some three hours after she went into convulsions.

• Singer Yoshimura Yumi (34, photo right, seated) revealed on January 2 that she got married on New Year’s Eve. One half of the J-pop duo Puffy, she announced on their website that she and a 29-year-old entrepreneur had tied the knot after a 4-month relationship, though they had been friends for about 7 years. Yoshimura was previously married to singer Nishikawa Takanori (39), also known as T. M. Revolution, from 1999 to 2002. More recently, she was in a relationship with actor Omori Nao (37) until they broke up last summer. Her musical partner, Onuki Ami (36), has been married to Glay vocalist Teru (38) since 2002.

• Internet marketing company Cyber Agent announced this morning that the blog IDs and passwords of some 450 celebrities were recently hacked. Clicking on images of such stars as Fujimoto Miki and former wrestler Jaguar Yokota allowed viewers to download an Excel file containing the account details. Cyber Agent contacted police, who are still investigating how the data was leaked, but the accounts were all updated on January 1. 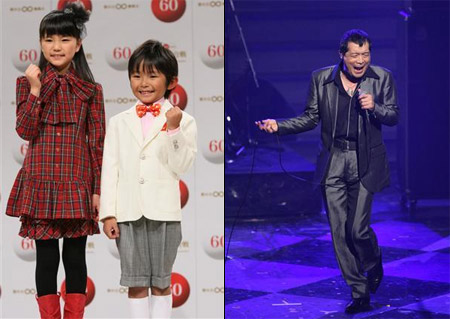 NHK are probably happy with the audience ratings for “Kohaku Uta Gassen,” the network’s New Year’s Eve song spectacle. In its golden age, the show was compulsory viewing for the whole nation, but with the increase in satellite channels, online distractions and competition from the other networks, its ratings have been in steady decline. NHK have tried various means to reverse the trend, and a show that keeps the ratings above the 40% level has to be deemed a success. The second half of Friday’s 60th anniversary show (9:00-11:45pm) featured VIP performances by Susan Boyle (48) and rock legend Yazawa Eikichi (60, photo right), but the 40.8% rating was lower than last year’s 42.1%. The show also included the Kohaku debut of hugely popular Johnny’s Jimusho idol group Arashi; the first appearance in 16 years by popular actor-singer Fukuyama Masaharu (40) in a satellite hookup from his hometown of Nagasaki; child stars Ohashi Nozomi (10, photo left), who sang last year’s “Ponyo” theme, and Kato Kiyoshiro (8, photo left), who has already been in more than 20 TV dramas and, most notably, a series of TV commercials for Toyota; and a powerful and emotional performance by singer Ayaka (22) in her final show before taking an extended break to battle Graves’ Disease.

Meanwhile, despite heavy promotion of this year’s taiga drama series and its star, NHK saw just average ratings for last night’s first episode “Ryomaden.” The latest dramatization of the life of 19th-century samurai Sakamoto Ryoma, it stars Fukuyama Masaharu, who has been working the TV circuit to help promote the series. Last year’s taiga, “Tenchijin,” started with an audience rating of 24.7% in the Kanto region, while 2007’s “Atsuhime” only managed 20.3%.

• Comedian Chihara Junior (35) has broken up with actress Uchida Yuki (34). The Yoshimoto comedian let the news slip during a comedy variety show aired on Saturday. The pair’s relationship was first revealed in the gossip magazines back in the spring of 2007. Uchida was previously married to actor Yoshioka Hidetaka for three years until they split in 2005.