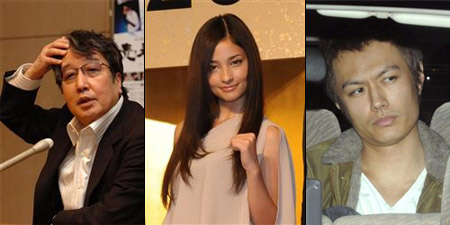 Management for Tsuka Kohei (61, photo left) announced yesterday that the renowned playwright is currently in hospital undergoing treatment for lung cancer. The latest production of one of his most famous works, “Hiryuden 2010 – Last Princess,” is already well into rehearsals and is set to start as scheduled on February 3 at the Shimbashi Enbujo theater in central Tokyo. Tsuka is following rehearsals by videotape and issuing his directions from a hospital bed, and is confident that the production is “almost perfect.”

Casting for the show was completed last summer, with the lead role going to up-and-coming actress Kuroki Meisa (21, photo center), who joined Tsuka’s theater group when she was 15. She and fellow cast members, including Tokushige Satoshi (31) and Azuma Mikihisa (40), only learned of Tsuka’s condition yesterday, though he himself was diagnosed in November. When he pulled out of a PR event on December 9, he said simply that he had a “fever caused by a cold.” He began chemotherapy from January 6 but continued to visit the theater for rehearsals.

An ethnic Korean whose given name is Kim Bon Un, Tsuka was born in Fukuoka Prefecture. He became involved in the theater while a student at Keio University. He uses all kana characters for his pen-name, an idea he said was inspired by manga-ka Chiba Tetsuya. A famously heavy smoker, his medical condition has forced him to quit the habit.

• Former actor Oshio Manabu (31, photo right) is to become the first celebrity to receive a jury trial in Japan. He is already serving a suspended prison sentence for drug use, and yesterday prosecutors filed a supplementary indictment at the Tokyo District Court in relation to the drug-induced death last August of 30-year-old bar hostess Tanaka Kaori (see earlier stories below).

The jury system was only introduced in Japan last year. Up to the end of last October, there had been 47 such trials and all ended in a guilty verdict. 32 of those accused received prison sentences between 3 and 20 years. Regarding the Oshio case, lawyer and former public prosecutor Osawa Takayuki said, “The case will focus on two points – whether Oshio gave drugs to Tanaka, and whether his failure to call for medical help led to her death.” He added, “In a similar case in 1989, the accused was given an 8-year prison sentence. I imagine the verdict in this case will be about the same or even a bit more severe.”
Earlier stories:
Oshio Manabu Arrested Again (Jan. 4, 2010)
Oshio Manabu Gets Suspended Sentence (Nov. 2, 2009)
Oshio Manabu Faces Drug Arrest (Aug. 4, 2009)