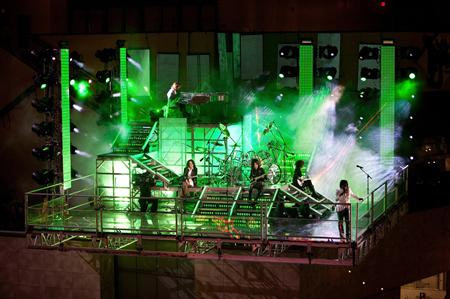 Rock group X Japan have been shaking things up recently in downtown Los Angeles. The band were in Hollywood for a weeklong promotion video shoot, at a cost of over $5 million, for their upcoming launch into the U.S. market. The first ever performance on top of the Kodak Theater was announced in late December with an open invitation to American fans to attend, though they were asked to register in advance at the J-Rock Nation website.

The band performed several songs for the weekend shoot, including “Endless Rain,” “Rusty Nail,” last year’s comeback single “I.V.” and their latest release, “Jade.” The performance included lasers, flame towers and fireworks, all shot from multiple cameras and helicopters. Some 8,000 fans and passersby took in the show, which ran from late afternoon. After dark, pairs of glowsticks were given out, allowing fans to cross them in the familiar “We are X” style. Drummer and band leader Yoshiki was performing publicly for the first time since neck surgery and wore a brace throughout. Guitars once played by the late Hide were placed on stage, while his role in the band has been taken by Luna Sea guitarist Sugizo. 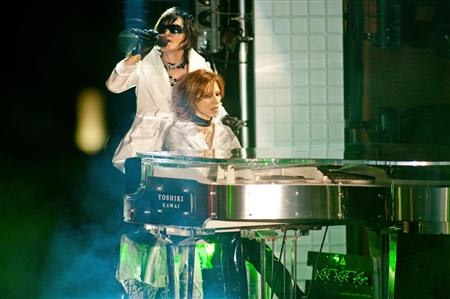 X Japan have been wanting to perform in the U.S. for almost two decades. They held a press conference in New York in 1992 but a concert tour failed to materialize before they split in 1997. After last year’s reunion shows in Tokyo, they planned to perform at Madison Square Garden. But Yoshiki’s health problems forced them to put that plan on ice, too. Yesterday he said, “What Toshi and I did at junior high school festivals and local culture centers, we’re now doing in the heart of Hollywood. If you hold onto a dream, it will come true.” 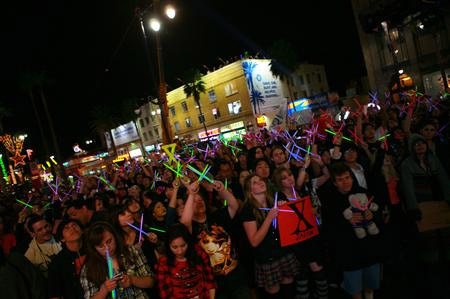 The band will continue filming for their promo videos until next month. The project is being produced by Yoshiki and directors include Dean Karr, who has worked with such artists as Marilyn Manson, Ozzy Osbourne and Velvet Revolver. An album is in the works and the band are said to be in negotiations to appear at the Lollapalooza rock festival in Chicago in August.

Actor Oguri Shun (27) and actress-model Yamada Yuu (25) did their best to avoid looking like a couple yesterday, but they’re not fooling anyone. The pair returned to Narita Airport after a weeklong vacation in Hawaii but, just as when they left, they passed through arrivals and customs separately. As long as the media don’t get a shot of them together, they can plausibly deny any serious relationship. But the giveaway signs were not too hard to spot. Oguri came out of customs with a luggage cart carrying some distinctly feminine baggage, including a pink golf bag. Most of the time he talked on his mobile phone, a common ploy to avoid reporters’ questions, and seemed annoyed by all the media attention. Yamada, on the other hand, was all smiles for the cameras as she walked arm in arm with friend and fellow model Hasegawa Jun (23). Yamada was seen carrying two passports, and something sparkly on her ring finger. But like Oguri she refused to answer reporters questions and denied that the vacation was a “pre-marriage” trip.

• Yesterday was the Seijin no Hi national holiday, and 20-year-olds across the country celebrated their coming of age. Many of the ceremonies featured words of encouragement from celebrity guests, and of course a few young celebrities themselves celebrated their new adulthood. Among them were talento Minami Akina and enka singer Oe Yutaka.

• Oe is a protege of veteran enka singer Kitajima Saburo, who yesterday had another reason to celebrate when he became the oldest artist to have a Top 10 single and album on the Oricon charts. His latest release, “Fufu Issho,” entered the singles chart this week at No.10. Kitajima, at 73, easily beat the previous record, held by the late actor Ueki Hitoshi, who made the Top 10 in 1991 with “Suudara Densetsu” at the age of 64.