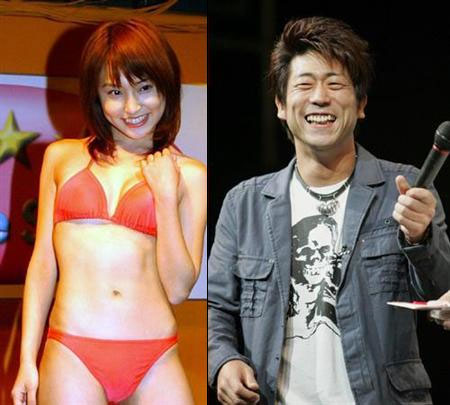 Comedian Haraguchi Akimasa (34) and pin-up girl Fukushita Megumi (25) are engaged. They both updated their blogs with the news yesterday after the story broke on Saturday. The couple have been dating for about a year and a half and are said to be planning to tie the knot in the spring in Yokohama, where they had their first date. Haraguchi is known as one of the country’s top “monomane” (comic impersonator), in particular top comedian Akashiya Sanma. He first hit it off with Fukushita when they both appeared on a “monomane battle” special on NTV five years ago.

Fukushita started out as a “gradol,” or gravure (pin-up) idol, in 2001, later expanding her repertoire to include acting on stage and TV. She made her singing debut in 2008 as a member of the J-pop group BeForU. But what brought her and Haraguchi together was her skill at mimicking J-pop stars such as Koda Kumi and Nakamori Akina.

• X Japan vocalist Toshi (44) announced yesterday that he has declared himself bankrupt and initiated a divorce from his wife of 13 years. He broke the news on his page on Mixi, the top Japanese social media network, saying that he hopes to make a “fresh start in life.” Confirming what has been widely rumored for years, he said that all his earnings over the last 12 years have gone to the self-development seminar business “Home of Heart,” often referred to in terms of a religious cult, led by Kurabuchi Toru (52, aka Masaya). Toshi and his wife Kaori (40), a former idol singer, married in 1997 but have been separated for ten years. During that time she has been living with Masaya in Nasu, Tochigi Prefecture and she performs under the stage name Wanku. 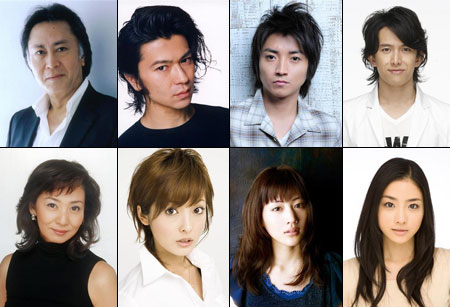 Hori Pro is lining up its stars for a special commemorative movie. Celebrating its 50th anniversary this year, and in a first for the company, the top talent management agency is producing a movie featuring a cast entirely from its own ranks. Directed by Nakata Hideo and based on an award-winning mystery novel by Yonezawa Honobu, “Inshitemiru” is a “fight to the death” thriller with ten starring roles. Yesterday eight of the names were announced, four actors and four actresses (l-r): Kitaoji Kinya (60), Takeda Shinji (37), Fujiwara Tatsuya (27), and Abe Tsuyoshi (27); Katahira Nagisa (50), Hirayama Aya (26), Ayase Haruka (24), and Ishihara Satomi (23). The movie is due for release in the autumn.