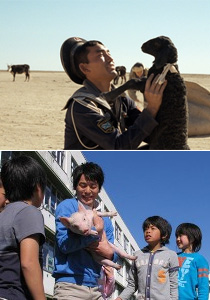 The 21st Tokyo International Film Festival came to an end yesterday, with the big winner being the international production “Tulpan” (photo top). The movie, a comedy about a sailor turned shepherd and filmed on the wild steppes of Kazakhstan, was awarded the Tokyo Sakura Grand Prix. Jury chairman Jon Voight saying the choice had been unanimous, “We the jurors live in highly complicated and sophisticated worlds, but in this story, this struggling nomad family made us discover our hearts and our identities,” Voight said. The Grand Prix brings with it a $100,000 cash award, and the movie also earned the best director prize for Sergei Dvortsevoy in his feature film debut. The awards for best actor and actress went to Vincent Cassel (“Public Enemy No.1”) and Felicite Wouassi (“With a Little Help From Myself”). The audience award went to Maeda Tetsu’s “Buta ga Itta Kyoshitsu” (School Days With a Pig, photo bottom), which stars Tsumabuki Satoshi (27). The movie also won the jury award of the newly created Toyota Earth Grand Prix, a prize that emphasizes the event’s new green theme, while the main award went to “Ashes From the Sky,” a Spanish eco-comedy. “Buy a Suit,” directed by the recently deceased Ichikawa Jun, was recognized in the Japanese Eyes section.

• The feud between rakugoka Shunputei Koasa (53) and talento Yasuha (47) keeps getting nastier. The pair divorced last year but just last week Tasuha unleashed a torrent of insults on her blog, called her ex a “kinpatsu buta yarou!” The phrase translates as “blonde pig” but is much worse in Japanese! When the media ran the story the blog was overwhelmed with traffic and the server crashed. The blog was then officially closed down. But after Yasuha suddenly pulled out of an event yesterday, she sent a fax to the media blaming her ex for threatening to sue her for defamation. She herself is a member of a prominent rakugo family, with her younger brothers being the popular Hayashiya Shozo (45) and Ippei (37). Ippei is to succeed to his late father’s stage name Sanpei next spring. Yasuha enthusiastically volunteered to produce the series of events that commemorate such a succession, but has clearly yet to recover from the shock of the job being given to Koasa.