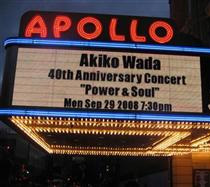 It was a dream come true for veteran singer Wada Akiko (58, profile), who celebrated her 40th anniversary in showbiz with her first ever overseas concert on Monday night. She performed at the Apollo Theater in New York, a mecca for the soul and R&B music that has long inspired her. For the “one night only” show, and the venue’s first ever by a solo Asian performer, “Akko” was joined on stage by Sam Moore of the duo Sam and Dave (72) for a rendition of “Soul Man.” The two have been friends since they performed together on a Japanese TV show all of 38 years ago. But no doubt the person she would have dreamed of performing there with was the late Ray Charles, her showbiz idol, who performed with her for her 30th anniversary show. The audience of 1,450 people included a tour group of 50 Wada fans who had traveled from Japan for the show. Wada visited the theater four years ago and made sure to touch the famous ‘Tree of Hope’ for luck, in the hope of one day appearing on the stage. The so-called “Godsister” of Japanese showbiz was a bundle of nerves for the five days she spent in New York before the concert. A renowned heavy smoker, she cut down on her 2-3 packs a day – and also her drinking – to get in shape for the show. But at the end of the show, she said she was heading out to have a wild night.

• The spat between X Japan’s Yoshiki and the Sumo Association continues. According to Yoshiki’s management, the association sent him a half-hearted apology late Monday night but insisted that Sunday’s incident was not their responsibility. They said he should seek his apology from the Kiriyama stable to which yokozuna Hakuho belongs. In turn, Yoshiki said he was no longer concerned about himself but suggested that, in the interests of sumo and its future, the association should apologize to Hakuho. He posted the comment on his mobile fan site, which led to a server crash on the Kiriyama stables website.