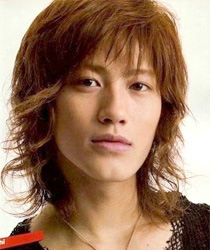 Johnny’s Jimusho (profile) idol Akanishi Jin (24) has landed his first movie starring role. The KAT-TUN member will play an early 1990s band vocalist in “Bandage,” which starts filming on November 3 and is scheduled for release sometime in 2010. The project will be the first time for top music producer Kobayashi Takeshi (49) to direct a feature film, his previous experience being on the Mr. Children documentary “es.” It reunites him with director Iwai Shunji (45), who created the project and is scriptwriter this time around. He decided to hand the directorial and musical controls to Kobayashi, who wrote the music for his 1996 movie “Swallowtail.” Akanishi said of the movie, “I’m looking forward to working in a way that I can’t experience with KAT-TUN. I think this is going to be a whole new type of Japanese movie.”

• Singer Hirose Kohmi (42) has remarried, this time to a 43-year-old American employee of a computer company. In her travels between Tokyo and Los Angeles, where she’s had a home for about ten years, Hirose met her new husband through a mutual friend about a year ago. She revealed on her website yesterday that they tied the knot in his hometown of San Francisco on October 12. They are looking for a new home together in California, though Hirose is now back in Japan preparing for a new album release and a concert tour. She was previously married to actor Ohsawa Takao from 1999 to 2006.