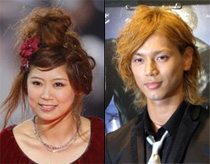 Popular actor Mizushima Hiro (24) and singer Ayaka (20) are madly in love, according to today’s issue of weekly magazine “Friday.” The mag includes a photo of the two sharing an umbrella in the rain, a common symbol of romance in Japan (similar to a heart pierced by cupid’s arrow). They were spotted in Tokyo’s trendy Azabu Juban district, where they enjoyed dinner together before disappearing into a luxury apartment building. The couple are both with the Ken-On management agency, who refused to comment on the story, saying only “they’re both adults…” The son of a former pro soccer player, Mizushima spent his youth in Switzerland and played the sport until his university days. He graduated from the prestigious Keio University and made his acting debut in the popular NTV drama series “Gokusen” in 2005. He landed the lead role the 2006 tokusatsu action hero series “Kamen Rider Kabuto.” He’s appeared in a handful of movies, including the big screen version of “Kabuto” and voiced the part of Bruce Banner for the Japanese dub of “The Incredible Hulk” earlier this year. Ayaka was the first female singer-songwriter to reach the Oricon chart top 3 with her debut release “I Believe” in February 2006. The following September, her 4th single “Mikazuki” became her first No.1 and she went on to win multiple awards in her freshman year.

• In a recent edition of the “Mecha Mecha Iketeru” comedy show, comedian Hamaguchi Masaru (36) admitted that he had broken up with his girlfriend – he and ditzy talento Ogura Yuko (24) had been widely rumored to be dating for the last couple of years. But he’s obviously very much in demand, as the latest issue of weekly magazine “Josei Seven” includes a story about his latest romantic conquest. Earlier this week he picked up the young woman, described as a beauty in her early 20s, by car in central Tokyo at around 9pm. The two spent several hours enjoying the Odaiba skyline before heading back to Hamaguchi’s apartment. Hamaguchi is the tsukkomi half of comedy duo Yoiko, along with Arino Shinya.