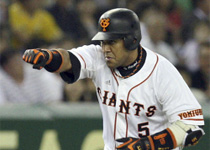 The Yomiuri Giants’ late-season surge seems to have brought their fans back to life. The team, for decades the most popular in Japan, has seen nothing but declines in its TV audiences for several years even as they won the Central League pennant last year. Not so long ago, Giants games were shown live almost every night of the season, but now they are a rarity on the terrestrial networks. Then in September, the Giants put on their longest winning streak in 19 years and were suddenly serious contenders. Much of the credit goes to Venezuelan slugger Alex Ramirez (photo), who this season broke the record for the most hits in Japan by a foreign player. A win in Wednesday’s game against arch rivals the Hanshin Tigers, with Ramirez’s 43rd homer giving him the highest tally in the CL, finally put the Giants on top of the CL standings for the first time all season. The teams’ rivalry goes back a long way, with the most famous Japanese baseball game ever taking place between them, with the Emperor himself in the stadium, in 1959. Wednesday’s game was nowhere near as historical, but NTV’s live broadcast pulled in a 15.8% audience rating. That’s the highest for a Giants regular season game in almost three seasons. Despite the fact that the Giants can clinch the pennant with a win tonight against the Yakult Swallows, Fuji TV only plan to show the game live on their satellite and cable channels. Even if the Giants do manage to defend the CL pennant, as they did last year, they still have to negotiate the playoffs before getting a chance to win the first Japan Series since 2002. Last year’s Japan Series champs the Chunichi Dragons have clinched the third CL playoff spot.

• J-Leaguer Nagai Shunta (26) and talento Shiraishi Chiyo (23) announced yesterday that they got married on Tuesday. The Kashiwa Reysol midfielder broke the news on his club’s website, while Shiraishi let fans know via her blog. The couple registered their marriage together at the Kashiwa municipal office.