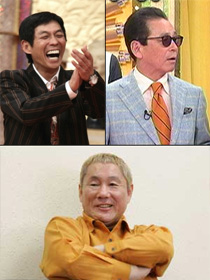 Japan’s top three comedians are to host three nights of comedy specials on NTV in late November. The three two-and-a-half hour shows, hosted by Akashiya Sanma (53, profile), Tamori (63, profile), and Kitano “Beat” Takeshi (61, profile) on November 28-30, are part of NTV’s 55th anniversary celebrations. Sanma will go solo in a studio filled with 30 TV monitors on which people will ask questions they’ve always wanted to put to him. He will have no idea what questions are coming and the show will be totally ad lib. In Tamori’s first appearance on NTV in nine years he will host a show that looks into various mysteries and unanswered questions, such as why people get fired up when they hear the theme to “Rocky.” The final night is perhaps the most unpredictable, given Takeshi’s quirky and often manic style, and will at least be something very different.

• TV Asahi staff have been reprimanded for an incident that took place during filming of the drama series “Salaryman Kintaro.” While filming in the car park of an apartment building in Tokyo’s Suginami Ward, staff put false number plates on three parked cars belonging to residents. But they failed to get permission from one of the owners, which led to the police getting involved. TV Asahi president Kimiwada Masao (67) apologized for the incident in his regularly scheduled press conference on Wednesday.

• Talento Oshikiri Moe (28) was slightly injured in a traffic accident on Wednesday evening. She was riding in the back seat of a taxi in Minami Aoyama, central Tokyo. As the taxi waited to turn left at a signal, it was hit from behind by another taxi. Oshikiri suffered minor bruising to her neck.

• Police say the Tokyo home of SMAP member Kimura Takuya (35) was probably the target of a recent burglary attempt. The house’s security system went off on the night of October 19 and company personnel found evidence of an attempted break-in on an upper floor window. Nothing was stolen and no report was filed with police. The house is in the same posh Meguro district as the home of comedian Matsumoto Hitoshi, which was targeted back in May.